“For a few years after they were married, our parents managed a butcher’s shop, the end building of a deformed 1930s’ crescent of ten shops, a series of white concrete cubes with elongated windows, unornamented, geometrical, exiguous. California had come to the outskirts of Northampton, futuristically prefiguring the society of consumption. The building was redolent of absent sunshine, leisure and romance ; although it was not long before the rain seeped through the flat roofs and in fungoid green stains on the inside walls, and subsidence cracks veined the already maculated concrete with black, and the parents separated and returned to the familiar red brick terraces from which they had unsuccessfully tried to anticipate their future release.” (Jeremy Seabrook : The Everlasting Feast)

I think I remember reading, some time ago, that W.H. Auden had once described his ideal as being to live “a Mediterranean life in a Northern climate”. I cannot remember where I read this (it might have been in Humphrey Carpenter’s biography of the poet), and have not been able to verify it. I may have misremembered, or even invented it, but that is beside the point : it is not Auden I am concerned with here, but Mediterranean lives and Northern climates.

The phrase stuck in my mind because, at that time, (about thirty years ago), I sympathised with the sentiment, although I had never been anywhere near the Mediterranean, and my idea of what life was like there was exceptionally vague. I supposed, though, that it involved making a leisurely daily round from café to café, good food and drink in civilised quantities, with plenty of time for contemplation of beauty, both natural and man-made, and convivial conversation. (This is, I imagine, very unlike the daily life of – say – the average Greek fisherman, but – again – that is not the point : we are discussing day dreams and ideals here, not realities.)

I doubt that Auden and I are alone among the English in nurturing this fantasy, which finds one expression in certain types and features of English buildings. There is the patio, which (as I have pointed out before), was intended, in its Andalusian home, to offer protection from the sun, but, in England, itself requires protection from the cold by heaters. Expanding the scope of the fantasy a little, there is the verandah (purloined from Hindi), and the pavilion. There is the balcony and the window-grill. In Spain, these serve the practical purpose of allowing a ground floor window to be left open safely during a siesta, and, as a happy side-effect, facilitate picturesque flirtations : 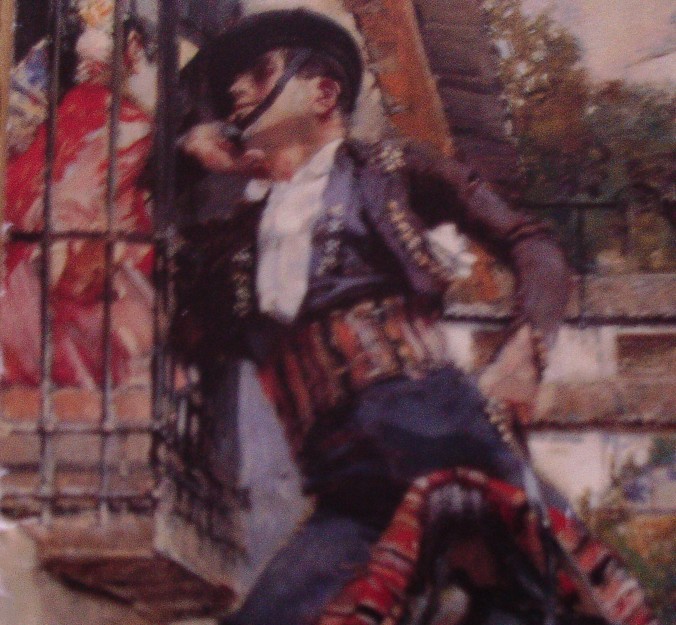 In England, where, I have noticed, newly built flats often sport vestigial balconies and waist-high grilles, they seem more designed to prevent children, sleep-walkers, and drunks toppling out of upper-floor windows.

Then there are white buildings, of any description. In hot climates the whiteness is, presumably, intended to reflect the sun’s rays and cool the interior. In a northern climate, they suggest, to me, a longing to be elsewhere, an aspiration to distance themselves from their homely, russet-coloured, indelibly local neighbours.

For a while (I think after an earlier visit to Southern Spain) I developed a fascination with these buildings and photographed them whenever I came across one : pavilions, stuccoed villas (“do you know that the stucco is peeling?”), a Sikh gurdwara, a working men’s club. 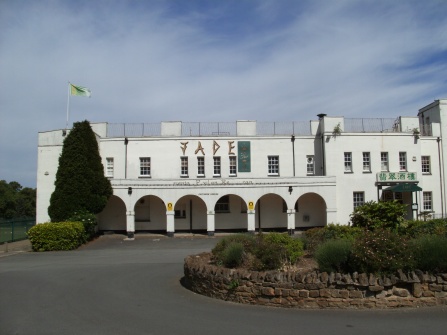 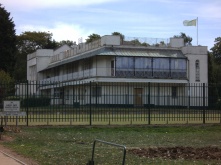 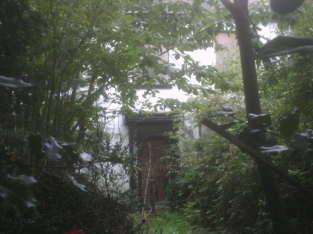 The last of these, a moderne house in Paradise Lane, Kettering, (which used to belong to my Uncle Ray), would be in its natural habitat in the South of France, an introduced species with a reasonable chance of survival on an English sea-front, but splendidly incongruous and redolent of hankering after “absent sunshine, leisure and romance” in its actual setting on the fringes of Wicksteed Park.

A danger, I find, in visiting the Mediterranean is that it stirs into life pipe-dreams of giving up the struggle against the damp and dreich, the winter warmers and beer jackets, and leaving to pursue that Mediterranean life in a Mediterranean climate. The day-dream objection to this, (as opposed to the insurmountable real world objections), is that it would mean I would no longer be able to watch much cricket.

But then it has often occurred to me that a day at the cricket (the proper kind that begins in the late morning and ends at dusk), with its white pavilions, its leisurely strolls around the boundary, its retreats into the shade, its prolonged periods of contemplation and breaks for refreshment, even its occasional siestas, is the closest the English ever come to attaining Auden’s ideal. Perhaps all the business with bats and balls is merely a pretext, and, perhaps, I would not miss it, or not too much.

3 thoughts on “Dreams of Leaving”