More from my Great-Grandfather in South Africa.  This piece of what we would nowadays call “citizen journalism” was originally published in the ‘Hinckley Times’ of 2 June 1900, two months after it was written, having, presumably, been brought home by sea.  I think I can detect a hint of asperity creeping into his tone at times.

WITH THE “L” COMPANY IN SOUTH AFRICA

HOW THE EASTER HOLIDAYS WERE SPENT

[By one of our own correspondents]

I expect Easter holidays are over now at home, but with us they have not yet begun, nor do we expect they will until the war is over.  It is very kind on the part of the Brigadier, or whoever it is, that is responsible for the moving about we have had.  It is done, no doubt, with the intention of showing the service company as much of the company around Ladysmith as possible.  We have made another move, close by Gun Hill, to a place pleasantly situated on the plain, but there is a scarcity of water which seems the usual order of things wherever our camp is situated.  On the Thursday before Easter, we marched straight from outpost duty to Surprise Hill camp, to find our regiment about to march off.  We trudged away through Ladysmith round to the left, over the Klip River, and away towards Bulwana.  We arrived in time to pitch our tents before dark, feeling tired, thirsty and fairly disgusted with old Kruger and things in general.  Having had no dinner, tea was thoughtfully served out about eight o’clock, and we relieved our parched thirst with one pint of that beverage to about five men.  After drinking this enormous quantity, of course we could not find room for eatables, and even in this matter, and considering our tired feeling, we were saved all trouble in drawing rations by the thoughtfulness of the Commissariat Department, who had provided none to draw.  However, we lay down and slept the sleep of the just.  The next day being Good Friday we had a holiday and indulged in the luxury (perhaps not for the officers but the men) of a good wash, and some, more daring than others, even had a shave.  But all things come to an end, and so did our holiday, for at three o’clock we had orders to fall in with blankets in addition to our usual marching order, to go out on 48 hours’ outpost duty.  As soon as were ready, we fell in, after trying to swallow the scalding liquor, and marched for a mile or so through a country full of prickly shrubs, then up and down and across ravines for another mile or so, round Gun Hill, then up to Lombard’s Kopje, stumbling over loose stones, clambering over loose rocks, until we reached the top, sweating and panting with the beneficial and much-needed exercise under the burning sun.  We never had the unnecessary privilege of taking our kit off for a few minutes.  Then again we fell in, and, carrying our blankets under our arms we marched to the places allotted to us for outpost duty, we remained for the night, on the look out for our friends who did not come.

We came off outpost duty at 6.30 on Saturday morning, and feeling much benefitted by our climbing on Good Friday, we entered heartily into the agreeable pastime, so popular with soldiers in Natal, of sangar building.  [A sangar is a temporary fortified position.] This is a very simple form of amusement.  All the requisites you need for this game are a few picks, shovels, and a crowbar or two, the larger the crowbar the more exciting the game … When three men lift a stone large enough for six, and get it within a foot of the top, and cannot get it any further, excitement runs high, and it is most amusing … but the most amusing part of this programme is just at the time of finishing, you get placed offside by the referee, generally an officer, and you pull the sangar down and commence as before.  Well, we started playing on Saturday morning at one o’clock, and went on, with interval, until twelve o’clock, when we had breakfast.  We resumed until dark with a few minutes for meals.  We then went on outpost duty, but resumed the game early on Easter Sunday with vigour until tea time, when we shouldered our belongings, and went for a pleasant stroll down the hill to the camp, where we stopped for the night.

At 5 am on Bank Holiday, we were on parade with our rifles and ammunition in case our neighbours should pay us a holiday visit.  We waited for them until the sun rose, about 6 am, but they failed to come, so we had breakfast.  We then proposed to go on with the sangar building and proceeded to our recreation ground at the top of Lombard’s Kopje, where we remained all day, and strolled down to the camp for the night.

On Tuesday our friends again disappointed us, and we set off up the hill for another sixty hours’ outpost duty, relieved by sangar building, and as the night was very wet, and we were not provided with waterproof sheets, it was quite funny to feel the water trickling down our backs and over our faces, and was even more laughable still, to get up and shake the water from our one and only blanket, and then lay down, again.  The odds were ten to one you had a sharp stone in the centre of your back, or in a more tender part of your anatomy.  The next night there was even more rain than usual, and the greater part of the time was spent in watching the rain, which presented this pretty sight.  We had the opportunity of washing our faces with the raindrops as they beat down.  As long back in the dim past as three months ago each of the service company were served out with 2 pairs of boots, not the common or garden boot, as served out to the troops.  Oh, dear no, a far superior article to those, as thanks to the Equipment Fund, which was so generously subscribed to by the good people of Leicester and Leicestershire, it was determined to send out the company as well-shod as possible, regardless of expense.  That they have succeeded in doing so is beyond all doubt, as there are several pairs of boots which have not worn out, notwithstanding that they have travelled some thousands of miles, truly, mostly on sea, where they were not worn.  However, it is a fact that one man has completely worn out both pairs of boots issued to him, but it is reported he did not take the necessary care of these, the most important and valuable part of his outfit.  That is quite possible, but I, myself, cannot believe it, as I saw him on parade when he had taken the precaution to tie the souls [sic] on with a piece of string.  If that is not being careful I should like to know what is.  One of our men declares that there must have been a mistake made, and that he had secured a pair which had been made for wearing when riding only, and as he had worn each pair for quite a month for marching, he may consider himself lucky in being allowed the privilege of paying for a new pair out of his own income.  Notwithstanding such pleasures of which the above are but a few, we all have our serious moments, and realise that we are out on active service and when we hear the boom of the guns, but a few miles from us, we are all determined to show that if it comes to fighting, we will prove ourselves worthy of the regiment to which we belong.

When asking for Cocoa, insist on having CADBURY’S – sold only in Packets and Tins – as other Cocoas are often substituted for the sake of extra profit.

[I assume this postscript is an early piece of advertorial, rather than another complaint about the rations.]

A happy Easter to you all.

The animal kingdom is traditionally well represented in depictions of Easter (rabbits, chicks) as are flowers (the daffodil), but I feel our friends the vegetables get a bit of a raw deal.  So here, from a blog that usually celebrates locally sourced, seasonal sport is a selection of what may well be local sourced, seasonal Spring vegetables (in fact an “impressionist pond collage of vegetables”, borrowed from Tessa Traeger’s photography for Arabella Boxer’s ‘A visual feast : the year in food’). 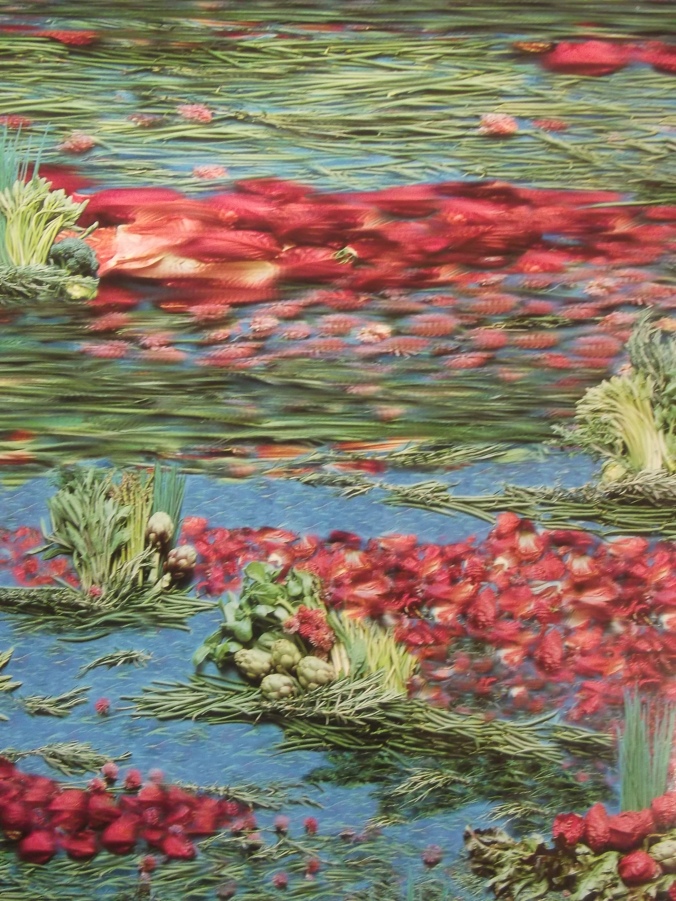