At about this time last year I assembled some of the photographs I’d taken in the course of the preceding season into a slide show, or, as I grandly referred to it, a film. (If you don’t remember that, or would like to watch it again, you can view it here.) I’d guess I was the only one to watch the thing from beginning to end, but I felt quite proud of it. I had been intending to do the same with the snaps I’ve taken this season and may, time and technology permitting, still do so. I wonder, though, on scrolling through them, how I can plausibly pass them off as a record of the cricket season when there are so few photographs of cricketers, so little, from the plain man’s point of view, cricket.

There are practical excuses for this, of course. It is not an easy matter even for professional photographers equipped with hundreds of pounds’ worth of zoom and training to capture the decisive moments of a match (a wicket falling, a six, the crucial catch) because of the difficulty in predicting when they will happen. I have no great pretensions as a photographer and use a camera bought roughly on my usual principle of choosing the second cheapest available from Argos.

To make matters worse, my faithful old camera, which I had mastered, gave up the ghost mid-way through the season, to be replaced by a newer, supposedly improved, version which, whenever I take a picture of an object at all far away (a cricketer, for instance), chooses, against my wishes, to mimic the gauzy, soft focus style of the once-fashionable, now frowned-upon photographer David Hamilton (yes, even Luke Fletcher). Another problem is that any fast-moving object (like most cricketers, though perhaps not Luke Fletcher) seems to be caught slipping away out of the frame in a ghostly-white ectoplasmic flash.

But these are remediable problems: I could buy another camera; I could even, as a last resort, read the instructions. Even so, I think I would still find that I’d chosen to photograph, not cricketers, but trees (endless trees, bare trees, budding trees,trees in Autumn), effects of the light in the sky and on the outfield, pavilions (grand whited sepulchres of pavilions, modest, homely pavilions, venerably ricketty pavilions) and (when I’m feeling bold, or perhaps sly) those of us who watch the cricketers.

I suppose we all photograph what we consider valuable and wish to preserve. In the early days of mass camera ownership people took photographs of their families, now they take pictures of themselves (and their dinners). If these (the trees, the pavilions, the spectators) are what I photograph they must be what I value and what, for me, make up the largest part of cricket. Remove the game from the English landscape, the English seasons and my interest in the technicalities, individuals and narratives is diminished.

I thought of all this earlier this month when I visited Duffield in Derbyshire, which lies between Derby and Belper on the Derwent Valley Line. I had visited Belper earlier in the season to watch Derbyshire’s 2nd XI (and was fortunate to catch a glimpse of a Spirit of Cricket there). On the way I had also glimpsed Duffield’s ground from the train and made a mental note to return there to watch a game before the season ended (I think if I had no local loyalties I would choose to watch cricket in this area above any other). I didn’t manage to make it there during the season, so I thought I’d visit when it had ended and, as you can see, it was every bit as lovely as I’d hoped, in terms of my trees, pavilions and landscapes … 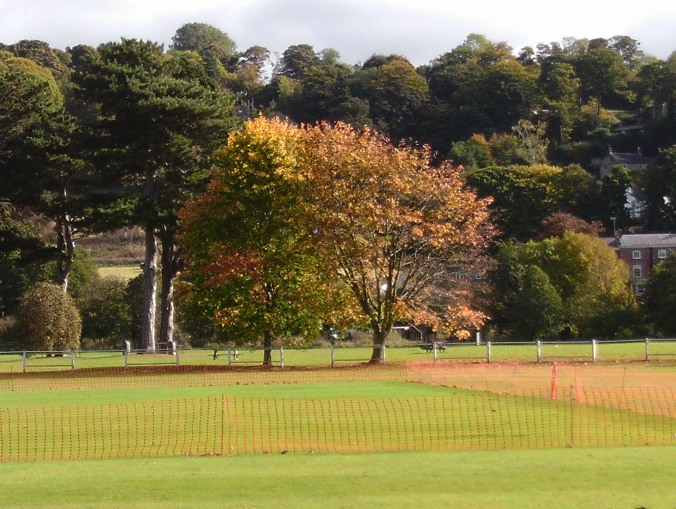 … in fact, perhaps lovelier in the Autumn than it would have been at the height of the season, as any tree-lined ground is likely to be.

So I wondered, as I sat there, looking out over an uninhabited, leaf-dusted pitch at the distant hills, why I bother with the effort and expense of watching the game of cricket at all, why I don’t simply tour the grounds in the close season and take photographs of trees (you may be wondering the same, if you’ve made it this far).

An obvious answer is that I am exaggerating my lack of interest in cricket as a game (which is true – I am rarely bored by the action, at worst a little disengaged from it) another that none of it (the trees, the pavilions, the boundary ropes and benches that allow the viewer to turn a view into a landscape as an object of contemplation) would exist without the pretext of cricket. A love of the game purely for itself (cricket for cricket’s sake) is rarer than you might think among those who write about it (if not those who purely play). We, most of us, use cricket as a pretext to satisfy some other urge or pursue some other agenda (very commonly psychological or political); mine (or one of mine) simply happens to be this aestheticised topophila.

(Another good reason is that cricket provides me with something external – narratives and a cast of characters (my Freckinghams and Fletchers) – to write about. Left to its own devices the mind (or my mind anyway) turns in on itself – and produces pieces like this …)

A last look back at Grace Road

This season I watched two of Leicestershire’s home games in the misbegotten Royal London 50 over competition but stayed to the end of neither. At one I slipped away early (my daughter, who was with me, had an evening appointment and there didn’t seem much likelihood, 20 overs into their reply, of Leicestershire making a match of it). At the other I came as close as I ever have done to walking out of a cricket match, with the Foxes on 30-6 after a 10.30 start.  But, even then, I wasn’t very close to walking out in the classical sense of that term, more cutting my losses and hoping to catch an afternoon’s cricket at another ground.  In the event, I stayed, the game ended at about 3.00 and the only noteworthy thing I saw was poor Tom Abell being carried off after a nasty blow to the testicles.

I don’t think I ever have walked out of a cricket match and I’m not sure it’s even possible; on the other hand, I rarely stay to the end (or, to put it another way, I usually slip away early). Walking out of a football match is a common phenomenon (sides from the North-east being particularly prone to it, for some reason). It is a piece of theatre, intended to convey disapproval of the way a side are playing, or of the management of a club or its owners.  It works best at home games and is most effective if carried out en masse, wearing replica shirts or other identifying regalia and preferably when the match is being televised.

This might work at a Test Match, I suppose, although I’ve never seen it done and, given the cost of tickets, it would be an expensive gesture for an England supporter to make.  At a County match it would only work if the entire membership rose as one in the middle of play and marched out as a body (preferably hurling their ties and replica caps to the ground as they went).  Even then, it would be hard to distinguish from a rush for the bar, or (at Grace Rd.) the appearance of Mr. Stew’s Lunchtime Specials in the Meet.

Simply leaving before the end of a County game is a different matter, as is arriving late, popping out at lunchtime or – a common phenomenon at Grace Rd. and Trent Bridge – watching the morning session before moving on to a watch rugby or football in the afternoon and returning for the last session and a later session in the bar.  Most commonly, though, the crowd begins to drift away and thin out at tea (the time when, in the olden days, most grounds began to fill up as people dropped in after work).

There are practical reasons, for this, of course.  Drivers want to beat the rush hour traffic and I want to be sure of catching the last bus (which, in my case, leaves the centre of town at 6.20). I have to get up early in the morning and I have things to do when I get home. It is vanishingly rare for a four day match to end in the last hour of the fourth day (or any other day) and unusual for the outcome of a one day match to be in much doubt ten overs out. And so on.

But, in my case, I am beginning to wonder whether there is not something compulsive about this slipping away early, some hidden motivation that I am trying to rationalise.  I could stay to the end of County matches, if I were prepared to spend a little more on travelling by train and I quite often slip away even from club games on a Saturday within walking distance of my house.

Perhaps it is because so few games (or days) end in a satisfying conclusion (when I do stay it is usually because I think there might be one in the offing) that leaving before the end avoids the sense of deflation that results from an unsatisfactory conclusion. Or perhaps, in some deeply-buried, delusional way, I think that, if I’m not there to witness it, the cricket will have no ending?