Welcome to the Real World!

This was the fourth day of women’s international cricket that I have seen in the last ten years : in that time I’ve seen two days of the international men’s game.  I wouldn’t say that I prefer women’s cricket (their games were played locally, and were affordable), but there are aspects of it that I do prefer : it makes a pleasant change, for instance, to see batting that is based on technique, rather than the cult of upper-body strength, and a relief not to have to endure too much of the monotonous thud of leather on  upper-tier seating.

More importantly, the women’s game has, until now, avoided the significance-bloat that blights most elite professional sport : the hype, the hysteria, the Twitter-storms, the vicariously enjoyed psychodramas, the angst.  It was small-scale, proportionate and communicated that sense of fun that sport can provide for those who play it as a diversion from the anxieties of daily life.  In short, it revived the best of that unfashionable phantom, the amateur spirit.

Now, however, we are led to believe, all that has changed.  The England side are full-time professionals.  The ECB has invested large sums in the women’s game, and it will expect some return on its investment. At the recreational level, the women’s game is thriving where male cricket is wavering, helped by the very considerable cash inducements made available to clubs who promote women’s cricket.  Sky are (I’m told) increasing their coverage and the BBC sometimes manages to convey the impression that cricket is, in this country, a game played principally by women.

England have a new coach (the old Northants seamer and rabbit, Mark Robinson) who has decided that the England team “aren’t fit enough” and need to “toughen up“.  We have had a grim “presser” (dread word!), where tough-talking boss Robinson rapped ashen-faced Captain Charlotte Edwards before “axing” her, thus earning himself, apparently some “abuse on social media“.  Wicket-keeper Sarah Taylor has now followed Jonathan Trott and others by taking some time out from cricket, due to “anxiety issues” and Lydia Greenaway has also chosen to bow out gracefully before her time.

So, what of the future? Having described the past of the women’s game as “cosy” and the era of culottes as “twee” (two cardinal sins), Mike Selvey (in the Guardian) went on to say:

“More miles into legs; better beep-test scores demanded; dietary programmes alongside strength and conditioning. He will drive them hard and cast the net wider. Some will go but that goes with the territory of being a modern, professional cricketer. It is time to join the real world.”

This week’s game at Grace Rd. (the first of this season’s limited over internationals) offered an early opportunity to test how this migration to the “real world” of professional sport is progressing : rather neatly, as no play was possible on the Monday, and the game was played on the reserve day, the first day represented the hype, and the second the reality.

I’m not sure that I’ve ever felt quite as out of place at Grace Road as I did on Monday, chiefly because it was filled, for the most part, with parties of schoolgirls : it was rather like being at a Taylor Swift gig, except that I don’t suppose you would find Jackie Birkenshaw having his lunch at one of those.  The Loughborough Lightning (the new women’s T20 franchise) were there, as were numerous people of uncertain purpose with Waitrose written all over them (Waitrose also had a stall where you could make your own fruit smoothie) 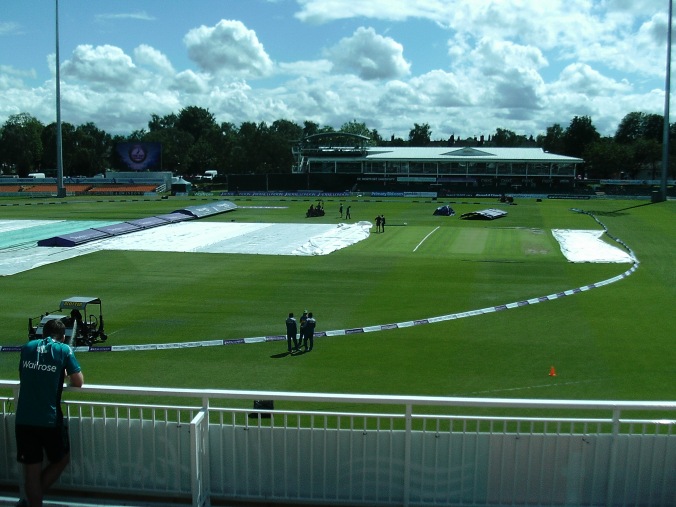 As with any event involving England, the ECB were out in force, in the shape of an army of young men in chinos with lanyards round their necks, as were Sky, the BBC and the press (not always easy to tell from the ECB).  Laura Wright (“the sporting soprano“) gave us her sweet-toned rendition of “Jerusalem” and a number she had written especially for the England women called “Heroes” (not, unfortunately, the old Bowie tune with new words).

There was a big screen and a DJ who seemed to have brought a “Now That’s What I Call Music” from 2006 (roughly when most of the crowd were born) and, disconcertingly, “Love Will Tear Us Apart” (and if you had told me, at the time of that tune’s release, that I would one day hear it played over the Tannoy at Grace Road, while a crocodile of Muslim schoolgirls filed into the Multi-faith Prayer Room, I would have suggested that it was time to lay off the old jazz woodbines for a bit).

There was all of that, a whole brave new world, but, unfortunately there wasn’t any cricket.  In a sign, I suppose, that they are attracting a new audience, many in the crowd seemed genuinely surprised that the match was called off after a second inspection at 5.00 (the game was meant to be a day-night affair, ending well after most in the crowd’s bedtime), but I was pleasantly surprised to find that the next day had been set aside as that old-fashioned thing, a reserve day.

By Tuesday the schoolgirls were gone, the lanyard-men, the big screen, the music, the sporting soprano and most of the cameras had gone too, but there was a full day’s play.  If the previous day had something of a Gulliver-in-Lilliput quality for me, it lingered on into the second day.  Grace Road has a huge playing area, and the boundaries had been brought in so far that, from some vantage points, you needed binoculars to see as far as the rope, let alone the players: 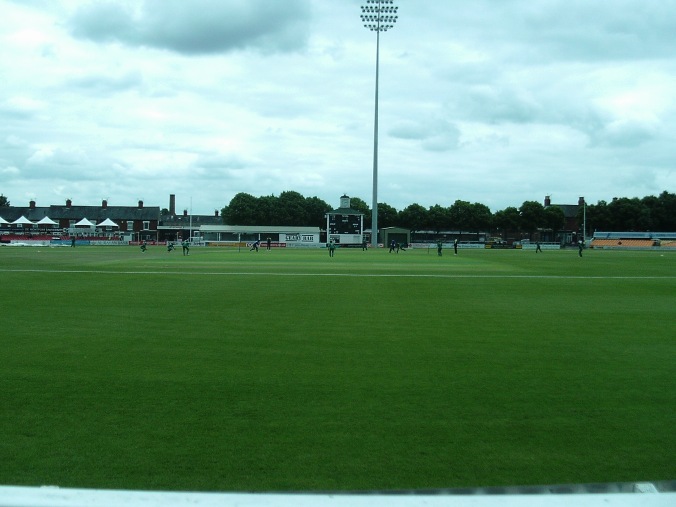 Most of the Pakistan team, too, seemed exceptionally small, roughly the size of an Under-14 boys’ team,

and I’m afraid they played at roughly that level too, whereas England resembled an exceptionally talented County Academy side.  If Geoffrey Boycott had been watching, no doubt he would have said “It’s women against girls out there“.

I might have expected Pakistan (who batted first) to be most troubled by the opening bowlers Anya Shrubsole and “Barnsley Bombshell” Katherine Blunt, who are fast by women’s standards, but they coped with them well enough, mostly by means of some textbook forward defensive shots, though there were also some decent straight drives and some more agricultural shovelling, mostly from opener Sidra Ameen, who finished on 52 out of a total of 165.

In fact, the damage was mostly done by the slow, looping off-breaks of new Captain Heather Knight.  Her figures of 5-26 flatter her slightly (the last two came when tail-enders tried to give her whatever the Urdu is for “some tap” and succeeded only in looping some fairly gentle catches to fielders about half way from that Lilliputian boundary) ;  it might, though, be some indication of a new spirit in the England camp that she had shrewdly deviated from the plan to bowl Shrubsole at the death and had reintroduced herself.

If women’s cricket were subject to the same level of scrutiny as male Test cricket we would still be hearing about the first ball of England’s reply.  New opener Lauren Whitfield edged a ball to slip, where Nain Abidi claimed a catch.  Whitfield walked off, but stopped half way when Kathy Brunt, supported by her colleagues from the England balcony, very audibly shouted “Go back! She’s dropped it and picked it up!”.

Whitfield turned on her heel and walked back to the crease, where the huddling Pakistanis gave her some Hard Stares and a display of double-teapotting.  Presumably acting on advice from the Umpires, she moped off again, with the demeanour of Daddles the Duck, in the face of continuing contrary advice from the balcony.  Substitute Hales and Anderson for Whitfield and Brunt in this scenario in the next Lord’s Test against Pakistan, and imagine the reaction.

After that brief setback, Tammy Beaumont and Heather Knight had little difficulty in overhauling Pakistan’s total, against some innocuous bowling.  Pakistan have overcome many obstacles to be here at all, and should be congratulated for that, but I’d be wary of hailing any kind of “new era” on the basis of a performance against such a weak side.

Tammy Beaumont (who is clearly very talented) has been playing for Hinckley in the Leicestershire Premier League this season.  When she played against my club I happened to be sitting near the boundary where she was fielding and she asked me whether I had come to watch my son play.  At the time I was a little miffed that she hadn’t assumed I was our much-feared strike bowler sidelined with a niggle, but I now realise that she is used to playing, even for England, to a crowd that is largely composed of the players’ friends and family (you can work out whose families is whose by the cheering whenever they touch the ball in the field).

Apart from that, the crowd (which might have reached 200) was made up of a smattering of the regulars and other connoisseurs, a few parties from women’s clubs, pairs of what looked like retired games mistresses and a few of those amiable eccentrics who always attach themselves to cricket.  (This pair, for instance, seemed to be a kind of two-woman Rainbow Alliance, and made a point of beerily embracing the most visibly Muslim of the visiting support in a heartening display of inter-community solidarity)

I have no doubt that many of the girls who were there on the first day will have formed the impression that cricket is a game that they can and should be playing (even if they didn’t get to see the game played) and that women’s cricket will continue to thrive as a recreational sport (provided the ECB don’t switch off the money supply).  It is not too far-fetched to suggest that cricket might even, one day, become a game principally played by women.

I shall continue to watch it when I get the chance, but I have to say that what I appreciated most about this game was much the same small-scale and even (whisper who dares) amateur quality that I first enjoyed ten years ago.  Whether it has a future as a mass spectator sport at a time when cricket is increasingly marketed on the basis of naked aggression and brute force (a quality that, barring some serious funny business in the chemistry department, is always likely to be in short supply) is questionable.  I wonder, too, whether all of the players, even, are entirely convinced by the idea that playing with bats and balls should make up a mature human being’s “real world“, rather than an escape from it?