“I’m so tired of working every day / Now the weekend’s come I’m gonna throw my troubles away / If you’ve got the cab fare mister you’ll do all right  / I want to see the bright lights tonight.”

This was the second game of professional T20 I’ve seen  (I admit I went more out of curiosity than in the expectation of enjoyment). The first was a gentle Sunday afternoon affair, which led me to conclude that every social event in English life aspires to the condition of a village fete. A little sweeping, and too optimistic. There is, also, as we have seen, the “good day out”, and then there is the “good night out” which, for that section of the population most likely to enjoy one (men, mostly, between the ages of about 18 and 50) has three key ingredients: a) a beer b) a curry and c) a laugh. All three were available in profusion at Grace Road on Friday evening (the cricket, such as it was, provided the laughs). 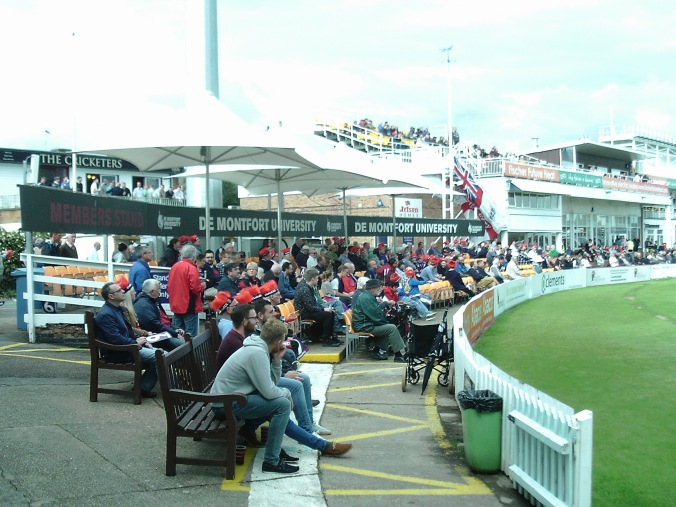 Past T20 campaigns at Grace Road have had various outlandish, family orientated themes: a beach theme one year, Hawaiian another. This year the approach is more direct: the slogan is “Bright lights, great nights” (we have floodlights now, you see) and the key offer is “Beer & balti” (“pre-match curry served with rice & naan bread” and “complimentary bar with unlimited draft beer and lager and house wines until the close of play”) and, where beer and balti are, can bantz be far behind?

For patrons who prefer an a la carte approach to getting drunk, the old Geary Stand (named after Leicestershire’s famously “genial” inter-war stalwart George Geary), which once offered a refuge from the elements for the more sensitive spectators

has been transformed into the Geary Bar and the Spice Bazzar, thus, conveniently, allowing spectators to drink, eat curry and shelter from the rain simultaneously.

Using cricket as a pretext to sell large amounts of alcohol has a history in England that stretches back to its eighteenth century origins as a commercial sport, when games were often laid on by inn-keepers as an alternative, or adjunct, to other, even less genteel, entertainments such cock-fighting and shift racing. Often, inevitably, the combination of booze and banter led to outbreaks of violence, such as after the match in Hinckley I described in an earlier post.

This culture of boozing’n’brawling (which never entirely went away) re-emerged and reached its apogee in the Hogarthian days of the old John Player League in the ‘seventies and ‘eighties. Before the reform of the licensing laws the pubs were obliged to shut at 2.00, roughly when the games began : as a result, hardened topers would repair to the cricket, having already put in a couple of hours in the pub, and continue drinking for another five hours, with predictable results. (There is, for example, a description in Jon Agnew’s “8 Days a Week” of the Leicestershire team having to barricade themselves in the dressing room while enraged Glamorgan supporters smashed its windows in their efforts to get at them.)

I have to say that, although there was no shortage of booze, there was no real belligerence to the crowd at Grace Road on Friday. Apart from my feeling that we are simply a less physically violent society than we were in my youth, there is hardly enough time to get fighting drunk in the space of a T20 game, particularly when (unless you really fancy drinking pints of Pimms) the strongest brew on offer was Foster’s.

The other selling point this year is the new floodlighting, which was switched on before it was quite needed. I find there is a certain romance in floodlit football, a sort of Beltane light in the darkness quality (the poetry of the raindrops dancing in the backlit fagsmoke), but having them on this early on what should have been a fine evening in late June served only to highlight the unseasonable murk, to have too much in common with that peculiar English contradiction-in-terms, the patio heater.

As the game took place the day after the Referendum, I suppose I should try to tie the two together in some way, to suggest that the mood of the crowd (a sort of jovially sullen defiance) reflected the mood of the nation, but that would be stretching it a bit.  It is true that the award of some cheques to various “inner-city clubs” was met with total silence, but then so was the lap of honour made by a junior club in the interval (led, of course, by good old Charlie Fox, whose sunny temperament seemed quite unaffected by the day’s momentous events).

If I seem to be treating this match as an anthropological exercise, that is because, considered simply as a game of cricket, it was of negligible interest. Warwickshire won the toss and, on a wicket still moist from earlier rain, and under low cloud, chose to bowl. Although Woakes, Rankin, Barker and Wright were missing, they were still able to play Clarke, Hannon-Dolby, Gordon and Adair, four seamers who would be automatic choices for the smaller counties. There was nothing fancy about the bowling, but, in these conditions, it would have been enough (in conventional cricket) to make any sensible batsman batten down the hatches and try to ride the storm out.

As it was, it was sad to see a talented group of batsman reduced to playing the kind of lamentable swipe that would get you slung out of a self-respecting pub team, in a futile attempt to “move the score along” and avoid the dreaded “dot ball” (although it was clear five overs in that they stood no chance of winning). Six of the seven wickets to fall were caught well short of the boundary the shots were intended to clear (the other saw Kevin O’Brien running himself out). If there was any sign of “360 degree batting”, it was mostly unintentional, although Lewis Hill did manage to play a deft slog-sweep for six and a neat scoop over the wicket-keeper’s head for four. Unfortunately, when he tried to repeat the trick a few balls later, the ball plopped tamely into the wicket-keeper’s gloves. 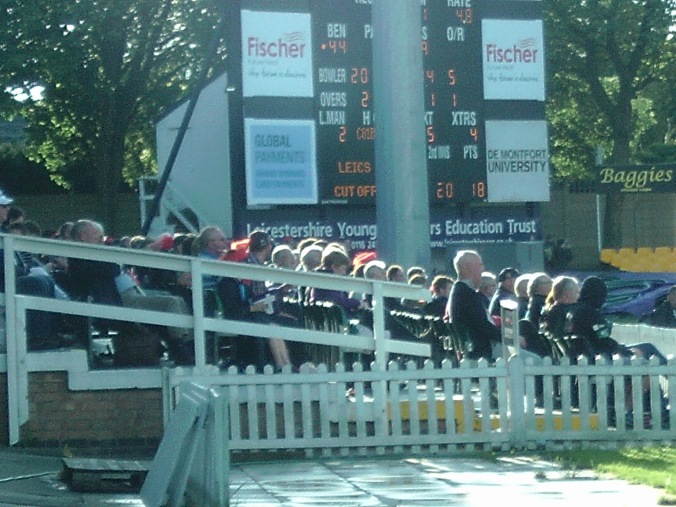 The crowd (apart from one man who shouted “You Bears” every fifteen minutes, like a cuckoo-clock, they were mostly Foxes supporters) greatly enjoyed any Leicestershire boundary, whether it came off the bat, or, better still, as a result of some incompetent wicket-keeping or mishaps in the field. They seemed particularly amused when spinner Jeetan Patel fired in a ball at about 85 miles an hour without, judging by the angry gesticulation that followed, warning ‘keeper Ronchi he was about to do so, but their favourite thing of all seemed to be when a Warwickshire fieldsman narrowly failed to cut off a boundary because he had slipped over on the wet outfield. If only one of them had gone head first into an advertising hoarding, I imagine it would have made their night.

As it was, the highlight of the evening came when Sam Hain claimed a low catch deep in the outfield. The batsmen, as is the convention these days, pretended they hadn’t noticed and stayed put. The Umpires both walked over to Hain and, presumably, asked him earnestly, on Scouts’ Honour, whether he had taken the catch fairly. Whatever the conversation, no wicket resulted.

Unfortunately for Hain, all this had taken place directly in front of the “Stench and Benno Stand”, where the Foxes’ Ultras congregate (yes, we do have some). As a result, whenever the ball came near him he was greeted with boos, catcalls, choruses of “Does your carer know you’re here?” and a persistent chant of “Cheat, cheat, cheat!”. In alternate overs, he tried to take refuge in front of the “Family Stand” (no smoking, no alcohol), but the small children there gleefully took up the chant “Cheat, cheat, cheat ….”. 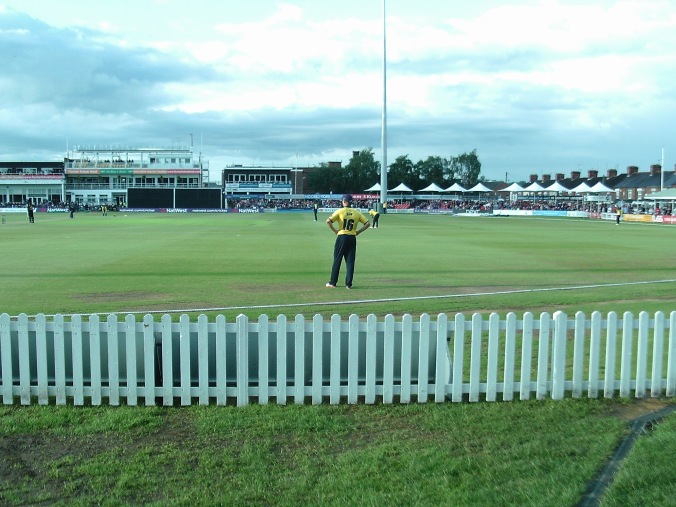 (I am not implying, by the way, that there was anything malicious about any of this.  It is just how you behave at the football, which is where most of the crowd have learned their sporting etiquette.)

There were almost as many children at Grace Road on Friday as there had been at last week’s Women’s International. One group will remember a squeaky-clean, officially sanctioned celebration of diversity, inclusion and all that is meant to be best in the modern game of cricket, the other a chance to stay up past your bedtime, eat chips, see your Dad get half-pissed and shout abuse at the opposition. I’m not at all sure which of the two groups is the more likely to have formed a lifelong attachment to the game. Whatever the answer, I don’t think they will be seeing me at too many more floodlit matches, at least not until the weather improves, or I become a Grandfather (whichever is the sooner).

Due to the railway timetable (which I won’t bore you with here), I left about five overs into Warwickshire’s reply (they won easily, of course).  Ian Bell opened their batting and I was able to catch a glimpse of his fabled “elegance” before I left, but I couldn’t help feeling  that, in this context, it was a little like watching Glenn Gould being asked to fill in between a stripper and the meat-raffle.

2 thoughts on “Live at the Electric Circus”