“Something is pushing them to the side of their own lives …”

How have the last few weeks been for you?

Perhaps your schedule has been packed : the Tests against South Africa, the first half of the T20 Blast and, of course, the Women’s World Cup, whose final seems, for some, to have become an event akin to the death of Diana Spencer or the opening ceremony of the Olympic Games in 2012. For you, perhaps, this High Summer of cricket looks set to continue until the end of August (more Tests, more floodlit T20s, more telly) before it fades away around the August Bank Holiday, with only the coda of a one day series against the West Indies (absurdly late!) to bridge the gap before England tour Australia.

Alternatively, if you don’t enjoy T20, don’t have a Sky subscription and aren’t an enthusiast for the women’s game, you may feel that your season dried up prematurely in about the middle of June, and that you are currently stranded in a mid-Summer desert, with only the oasis of a single round of Championship games this weekend to sustain you. Your season will only resume when the nights are encroaching on the days and there is an Autumnal nip in the air, that is if you have not already been lured away by the raucous siren songs of the football season.

I suppose this is one thing that I meant when I talked about disintegration (or diversity) : the cricketing public is no longer a single, monocultural, entity that follows the same seasonal narrative, but has fragmented into multicultural groupings, each with their own narratives, conversing mostly amongst themselves, and suspicious of, or in denial about, the existence of the others. Those forms of the game that the ECB wishes to see thrive (the international game, women’s cricket, T20) occupy the centre ground, and those that they do not are pushed to the sidelines, or – to use a word that has occurred a lot to me lately – marginalised.

This marginalisation can be both temporal (the Championship being pushed to the beginning and end of the season) and physical. The last Championship game I attended (for a day) was the game between Derbyshire and Durham at Chesterfield, which began on 3rd July, when matches were also being played at Cheltenham, Beckenham and Scarborough. As a long-standing advocate for outgrounds, I would normally applaud this outbreak of diversity, but it was hard not to feel some sense of displacement and relegation to the margins (the Women’s World Cup having requisitioned Derbyshire and Gloucestershire’s usual homes for the duration).

I have written about my visits to Queen’s Park, Chesterfield several times before and would still award it first prize in the small-to-medium-sized County grounds category, but a little of the old magic seemed to be missing. Perhaps because it was still term-time, the miniature railway that runs through Queen’s Park along one side of the ground was confined to the sidings (without even a miniature replacement bus service), the sound of children’s voices from the playground were diminished and the fish-and-chip van that is usually such an olfactory ornament to the ground was nowhere to be seen, or smelt. I was sad to see that the ghost sign for the Picture Post has been painted over.

This feeling (of being marginal people, in the shadows) did not stem from the size of the crowd. I would say it was as large as for the better attended games in the WWC at Grace Road, but we are not the story, and our place in that is as footnotes, marginalia. 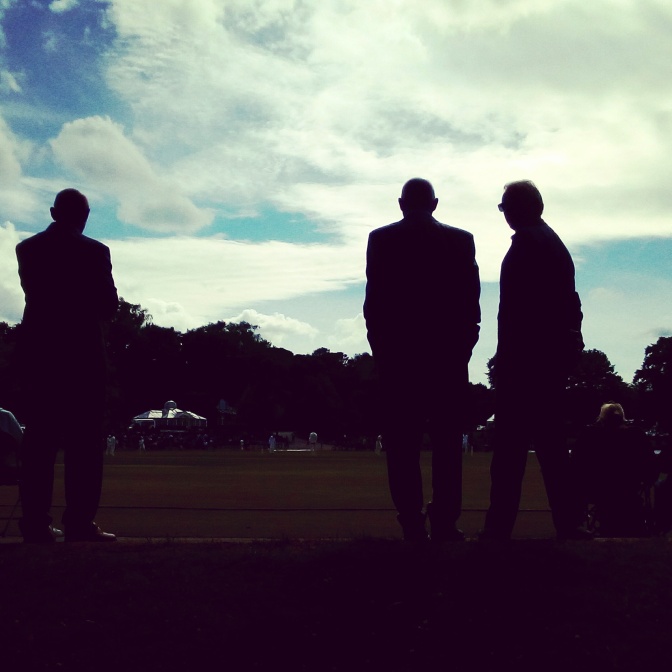 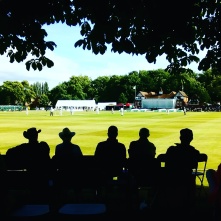 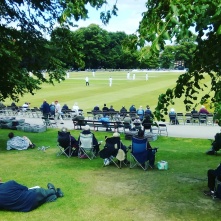 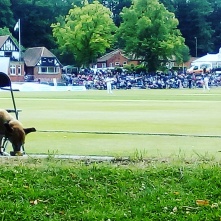 The cricket (which is rarely the point of these flying visits) was a reminder that it can be quite relaxing to watch a batting side gently collapsing after a promising start (Derbyshire) and mildly amusing to see a wagging tail frustrate the bowlers (Durham’s), provided that neither of them are the side you support. Durham (who have, in the most literal sense, been relegated to the margins of Division 2 by the ECB) won the game, and have now overcome their 36-point handicap to overtake Leicestershire. Hamidullah Qadri, who has emerged into the foreground this season (and taken his place in the narrative), was playing, but his innings only lasted four balls, and I did not see him bowl.

Derbyshire (in the shape of their 2nd XI) featured in both of the other days of County cricket I have watched in the last seven weeks. One of these was at Belper Meadows, which retains its crown as my favourite ground in the Small Grounds category, though a little of its appeal depends on the quality of the light, which was generally subdued, though it had its moments.  The field of what I think is maize*, which adjoins one side of the ground, had grown higher than I have seen it before and must be close to being harvested (I feel this must have some metaphorical relevance, but nothing springs to mind). 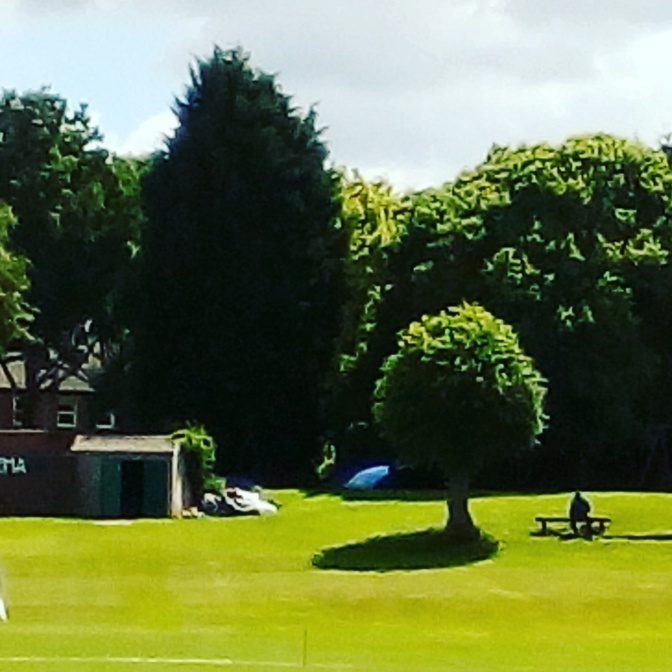 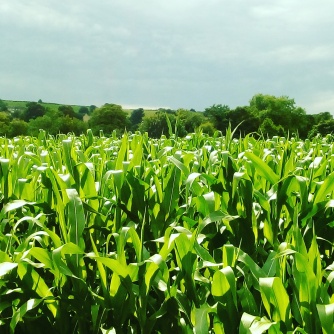 Hamidullah Qadri was playing in this game too : he bowled a long spell of robotically accurate off-spin and took a wicket. Also playing was Harvey Hosein, another young player who made a dramatic first-class debut for Derbyshire, equalling their record for the most dismissals by a wicket-keeper, but has since been relegated to the margins of the 2nd XI by the arrival of Gary Wilson from Surrey and Daryn Smit from Kolpakia. Even aside from his wicket-keeping (which seemed competent, though he struggled a little with Qadri), his batting (he made 85* at Belper and a century at Kibworth) ought to make him an attractive target (if Derbyshire don’t want him) for any County looking to strengthen their middle order. I can think of one, not very far from Derbyshire.

Hosein, though not Qadri, also played against Leicestershire’s 2nd XI at Kibworth. This game, which, on a third day of cloud and drizzle, 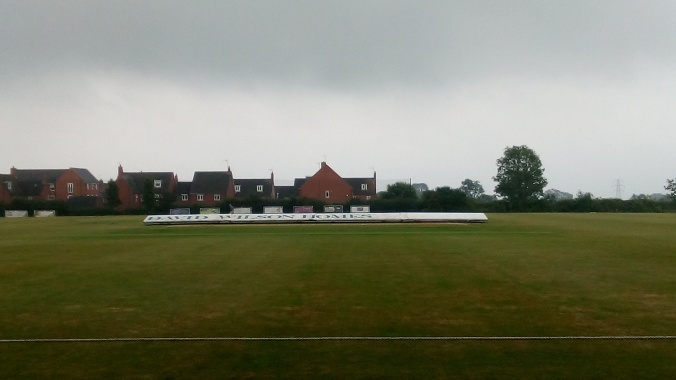 seemed mostly to consist of declaration bowling against a side who had no real incentive to declare, made me wonder seriously if I might not be able to find some better use for my time. If you look hard enough, and know where to look (and the real refuseniks do), there are always games to be had somewhere : Academy games at Uppingham, 2nd XI T20 double-headers, age-group sides. Though these all have their merits, convincing myself that I really want to watch them does feel uneasily like hunting frantically for a half-drunk bottle of creme-de-menthe left over from Christmas, and claiming that this is because I have a real taste for the stuff, rather than some kind of addiction.

Nonetheless, I set off for Leicester Grammar School last Monday with the earnest intention of watching a 2nd XI T20 against Northants. As the bus approached Great Glen, however, it was raining quite hard, and I decided, with what that felt uneasily like relief, to stay on the bus and proceed on to Leicester, where I had a cup of coffee and visited a museum instead. Watching 2nd XI cricket can be a wonderful way of discovering some of this country’s genuine diversity : this season I have stumbled across Europe’s largest Gurdwara in Smethwick, some gypsy horses on the way to Desborough, and a Japanese water-garden in Milton Keynes : 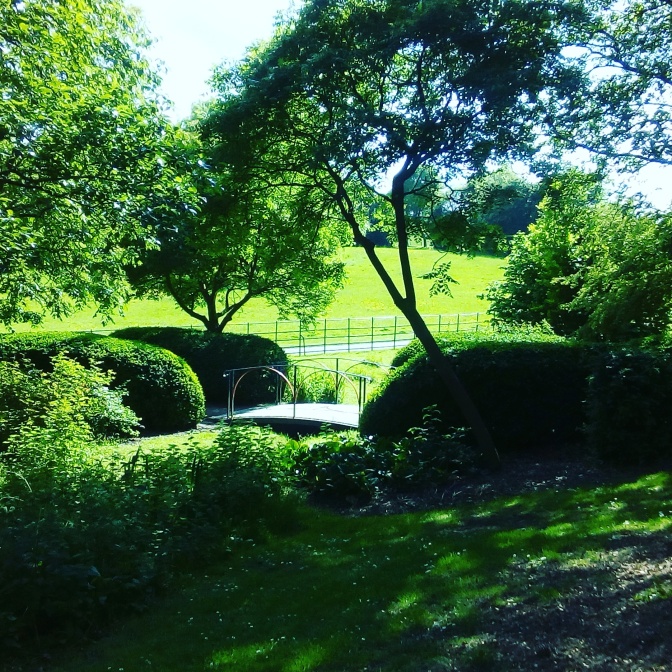 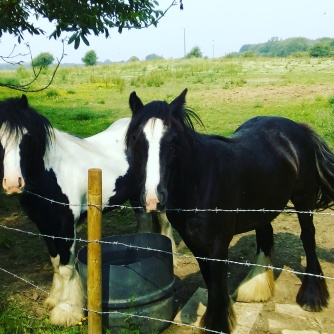 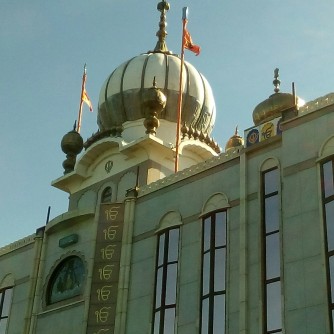 but, although watching cricket can provide a pretext for visiting places that it would not otherwise have occurred to you to visit, it is not a necessary one. So, over the last fortnight, I have visited Leamington Spa and Cheltenham, without the faintest sniff of leather or willow, and enjoyed the break.

As you may have discovered in bed sometimes, I suppose you can only be pushed so far towards the edge before you fall out altogether.

*Apparently it’s sweetcorn (but, see the further correction in the comments).