As anyone who is likely to be interested will know by now, Leicestershire coach Pierre de Bruyn has left the club, by what the official website, amongst other periphrases, described as “mutual consent”. And, as every commentator observed, this came as no surprise.

Peering through the thicket of euphemism, the problem appears to have been the inability of de Bruyn and Captain Mark Cosgrove to work together. Matters seem to have come to a head on the last morning against Kent. Promotion outsiders Kent were keen to contrive a result : Cosgrove was agreeable, but de Bruyn was not (given Cosgrove’s apparent reluctance to declare last season under the old regime, there is a certain irony about this), leading to the Captain’s otherwise puzzling six-ball 24. There followed, one may infer, a “him or me” ultimatum to the Committee from Cosgrove, followed by de Bruyn “mutually consenting” to pack his bags and biltong and seek pastures new.

De Bruyn was in an unenviable position from the start. An inexperienced coach, with a respectable, but unspectacular, playing record, he took charge of a club with a group of experienced players, brought together by the previous coach, who might have been expecting to be left to play out the remainder of their careers in a convivial atmosphere, and had been doing with some degree of success. To make matters worse, the core of this group were Australian, as had been the previous Coach, Andrew MacDonald, and de Bruyn is, of course, South African. “Intense” is the word most frequently applied to describe De Bruyn, whereas the previous atmosphere at the club might best be described as “relaxed”.  His previous experience as coach of the Namibia Under-19s will not have been the ideal preparation.

The coach did little to ingratiate himself before the season started, publicly upbraiding his senior players for having a “culture of underperformance”, naming and shaming Paul Horton, Mark Pettini and Angus Robson (younger, but, perhaps as an Australian, cut a fair amount of slack). Robson “mutually consented” to leave immediately, Pettini seems to have vanished into thin air, and Horton is currently averaging 26.52, which is worse than the “underperforming” 34.92 he managed last year. De Bruyn’s approach might have been vindicated had his “culture of performance” improved performances, but, some success in limited overs cricket aside, results have been poor, and the only player to have had an unequivocally successful season has been Mark Cosgrove.

This is not the first time de Bruyn has been involved in similar situations, albeit it on the other side of the divide. He was one of a group of senior players (including H.D. Ackerman and Andrew Hall) released by Dolphins in 2010, to make room for younger, home-grown talent. Before that, having been released by Titans, he claimed that he and Alfonso Thomas had been “chased away from the Titans like dogs”, and criticised coach Richard Pybus as “one-dimensional” and “a very boring coach”, who relied on “yoga and other nonsense”, claiming that “the players get so drained from this that on completion one does not know where you are”. While playing for Easterns, he was once suspended for “acts of misconduct and using crude and abusive language”. He is clearly something of a stormy petrel, and I should be a little concerned if he alighted anywhere near my club.

Anyone unaware of the weekend’s events might have wondered, on arriving at the ground on the first day, why Cosgrove and Clint McKay (the Australian seamer who acts as one-day Captain and the skipper’s mate, in the full Australian sense) seemed to be in such cheerful moods. Graeme Welch and John Sadler, the ex-Derbyshire duo who have taken over as interim coaches, looked pretty chipper too. Otherwise, there seemed few grounds for optimism. After rain overnight, and more in the morning, it came as a surprise that play began shortly after lunch. With Leicestershire forced to bat on a moist, green-tinged pitch under low cloud, the only people who seemed less comfortable in the conditions than the batsmen were the spectators.

Had Kenneth Williams been seated behind the bowler’s arm (an improbable scenario, I admit), he could have been taken the opportunity to shout “deviation!” after almost every delivery, as the visitors’ four seamers achieved exaggerated movement, both in the air and off the pitch. A Leicestershire supporter might have added a weary sigh of “repetition”, as both openers (Dearden and Carberry) were dismissed, having mustered 3 runs between them.

(You may be surprised to learn that Carberry is playing for Leicestershire : he has been having a poor season for Hampshire and has been loaned to us, supposedly for the remainder of the season, though there is credible talk (or incredible talk from a credible source) that he may be offered a contract and even the Captaincy. If that comes as a surprise to you, that surprise is shared by most Leicestershire supporters and, I imagine, by Carberry himself.)

The rest of the first innings was an unwelcome repetition of too many this season. After a poor start, Cosgrove made 92, with some support from Ackermann or Eckersley (the former here), and an effort, at least, from Lewis Hill, before the innings closed on 222. But let us go back to Cosgrove for a minute : he has made the bulk of the runs so often that I have become accustomed to taking him for granted, but the weekend’s hint that he might not always be with us made me concentrate, for once, on his batting.

In a game of word association, the first word that might occur in connection with Cosgrove is “fat”. There have been times in his career when he has been overweight, but he currently looks as fit as a man with his constitution is ever likely to be : he is, though, an unusual, top-heavy, shape, as though his torso were too large for his legs. Certainly no-one who remembers Colin Milburn in his prime (or has seen Richard Levi recently) would say that Cosgrove bats like a fat man. He is capable of the fat man’s pull (legs apart, power coming from the belly), but inside this fat batsman there is clearly a thin one trying to get out, perhaps even that epitome of the “elegant left-hander”, Frank Woolley. His favoured off-side strokes may be hit with great force, but are executed with all the delicacy and precision of a Japanese calligrapher. He is always determined to make runs, but, in this match, that determination seemed to amount almost to desperation. 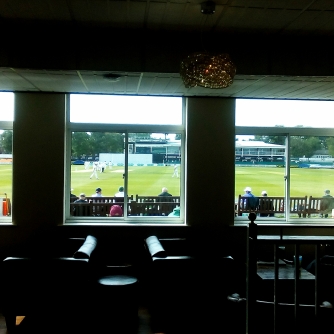 The second afternoon of the game seemed to belong to another game entirely, or another season. The sun shone, a soft breeze blew, the ale left over from the weekend beer festival was being sold off cheaply, and was eventually given away to the Members (although only in half-pints). It was the last of the Summer ale, and felt like the last day of a Summer that had never quite arrived. Unfortunately, it was also the afternoon when Gloucestershire batted.

Gloucestershire are a star-free side but, unlike Leicestershire, they make the most of their talents. Their highest score was 63 (by the same James Bracey who had made an impression on Charlie Shreck and others for Loughborough MCCU earlier in the season), but there were two other fifties and no score of fewer than 22 by the top seven. The demons in the pitch had taken the afternoon off (perhaps in the beer tent), and the bowlers were unable to summon up any of their own. Clint McKay bowled at little more than medium pace : he has the best economy rate of any bowler in the Division, but he can no longer be relied upon to take 50 wickets a season. Gloucestershire continued their innings into the third morning, when they finished on 368.

Leicestershire’s second innings was a repetition of their first, except that the conditions were even worse, and they made fewer runs. The only hope of avoiding defeat was for Cosgrove and Eckersley, who put on a fourth-wicket partnership of 79

to hang on for grim life until the game was finally extinguished by rain or bad light. As so often this season, the sky was dark and the floodlights on by lunchtime. The batsmen were clearly have difficulties seeing the ball, and Cosgrove raged hard against this dying of the light, and in favour of coming off the pitch. Unfortunately this was in the hearing of the Umpires, who, in spite of endless fiddling about with light meters, seemed determined to stay on at all costs.

Eckersley fell to a swooping delivery from the normally innocuous medium-pacer Noema-Barnett. Cosgrove desperately chased a wide one from the strapping, rapid Norwell, and was given out by Umpire Nigel Cowley, a decision which seemed to be more in response to his uninvited views about the light than an honest opinion about whether he had made contact (had there been any daylight, there would have been about an inch of it between bat and ball). Sitting by the players’ entrance to the pavilion, I wondered at quite how eloquent an Australian of Scouse heritage can be while using but a single word.

There were, I think, fifteen spectators in the ground (plus Ben Raine’s Dad’s golden retriever) on the last day, which began with Leicestershire nine runs ahead, with three wickets remaining. I suppose we were hoping it would rain. However, Nigel Cowley, who has been a useful player and decent Umpire in his time, but only has one match to go before he retires, seemed keen for the match to end as soon as possible. Gloucestershire, having hit lucky with Cosgrove, acted as though they had come across a faulty cash dispenser, and appealed frantically and continuously for anything. McKay was caught behind, having made as much contact with the ball as Cosgrove. Opinions differed about last man Klein’s dismissal : it looked to me like a bump ball, whereas my companion thought it had come off his boot. The whole thing, even including a brief interruption for rain and Gloucestershire’s formality of a reply, was over in less than an hour.

Liam Norwell, who admittedly bowled well, finished with 8-43 : I doubt he will ever take as many as easily again. This gave him 10 wickets in the match, for the second time this season against Leicestershire, placing him slightly ahead of Jofra Archer, who has taken 18, and James Pattinson (16). In addition to having been (forgivably) beaten twice by Nottinghamshire and Sussex, who are strong bowling sides, we have now lost twice to Gloucestershire, on paper a weaker team, by an innings and by 10 wickets. At least we can look forward a tight finish to the return fixture against Northants, I suppose (though not, I hope, in the middle of the night this time).

It isn’t always the hope that kills you, you know.  Sometimes it’s the repetition.