“You’re very optimistic” the gate-woman at the St. Lawrence Ground observed, laughingly, as she trousered my £20 note in return for a ticket which is now, I imagine, something of a collector’s item (I am reasonably confident that I was the only purchaser). As a general character assessment “fatalistic” might be nearer the mark, but I suspect that she intended it as a euphemism for “silly”, given the prospects for play (and no doubt I am).

According to ‘The Cricket Paper’,

and I suppose it must, if they happened to have been there on one of those three days. On Monday, Leicestershire’s bristly nemesis Darren Stevens had threatened to take all ten of our wickets (he finished with 8-75), before Lewis Hill and Callum Parkinson broke the record for a tenth wicket partnership set by George Geary and Alec Skelding in 1925. On Tuesday, Neil Dexter (who still has time to become the new Darren Stevens) snaffled another five wickets, and, on the Thursday, Mark Cosgrove (for motives that have been much speculated-upon) hit 24 off the first five balls of an over from Matt Coles, before edging to the wicket-keeper off the sixth.

It was one of Leicestershire’s more encouraging performances, there was an innings I should like to have seen from Sam Northeast, and the weather (for two and a half days) was blissful. Unfortunately, the only day on which I could be there was the Wednesday. It started to rain shortly before the start of play (having, briefly, been fine enough in the morning to lure me in), gently at first, then heavily enough for the day and ground to have been abandoned by lunchtime. This not only spoilt my day, but the match, which was hastened to its all-but-inevitable, drawn, conclusion by the return of the rain on the afternoon of the fourth day.

Canterbury, like Worcester and Hove, has the reputation of being one of the more conventionally romantic of the Counties’ headquarters : with a little imagination, I could sense that it was somewhere I should enjoy watching cricket, if there were any cricket to be seen. The majority of the ground is ringed by low banks of seating, and enough trees to justify the soubriquet “leafy”, interspersed with some medium-rise buildings, none of them offensive. The inevitable “redevelopment” – some retirement flats and a branch of Sainsbury’s – struck me as unobtrusive, though whether I would think so if I remembered the ground in its heyday I don’t know. 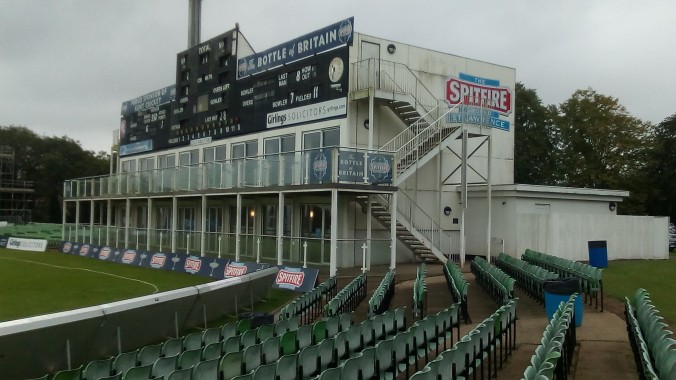 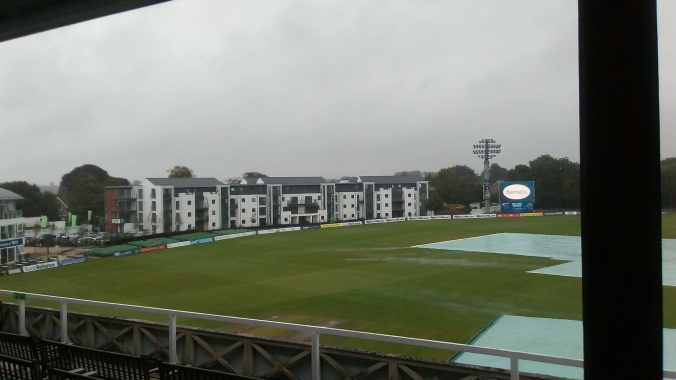 Another new development, The Lime Tree Cafe, though not a patch, in culinary terms, on our own dear Meet, offered a snug vantage point from which to observe the rain (or cricket, where applicable). 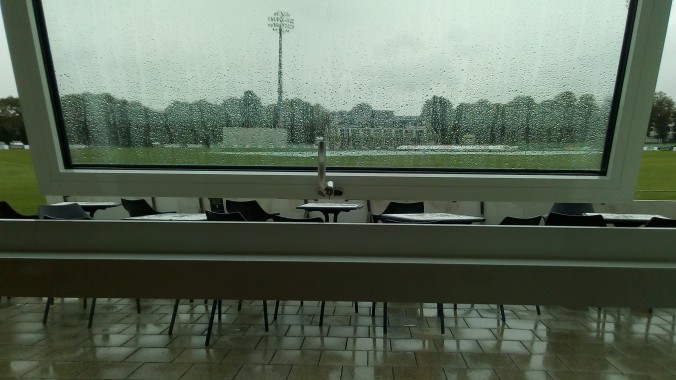 A few of the younger Leicestershire players had taken refuge there too, giving off the vague impression of children keeping out of the way while the grown-ups argued.  Thanks to the rain, I had plenty of opportunity to inspect both the interior and exterior of the Frank Woolley Stand, a two storey concrete structure which is, perhaps, best described as “venerable” or “imposing” rather than “elegant” in the style of its dedicatee. I think it is somewhere I should only choose to sit to escape from the elements (excessive sun, wind or rain), but then so many days at the cricket are afflicted by one of those three. The leaking roof, I thought, only enhanced its discreet charms, but I suspect it will be “redeveloped” as soon as funds allow. 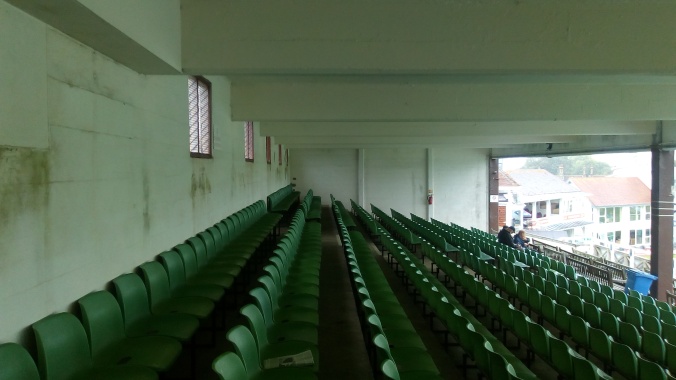 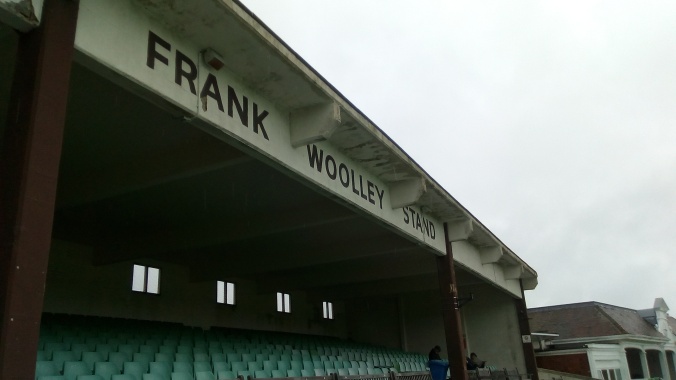 The ground’s best-known feature, the lime tree which used to grow inside the boundary, apparently died of “heart rot”, an ailment I imagine as a feeling of profound discouragement brought on by prolonged soaking. Though very wet by the time I returned to the city centre, I think I managed to escape a dose and, having taken a liking to both Canterbury and its cricket ground, I hope we will meet again (though, at present, I don’t know when), preferably on some sunnier day.

This has been quite the season for novelties (or things that, Miranda-like, are new to me), and there was another in the shape of the format for the tour match against the West Indies. It was intended to be a two-day game, with one innings a side ; the first innings to be limited to 100 overs, the second not. The novel twist was that the West Indies were allowed 15 players, Leicestershire only 11. The Leicestershire side, with the exceptions of Ned Eckersley (who was captaining) and Harry Dearden, were the squad members who had not played against Kent, with debuts for teenagers Sam Evans and Harry Swindells, and tentative returns from injury for Zak Chappell (who has, again, spent most of the Summer playing as a batsman for the 2nd XI), and Richard Jones (who has not been seen since April).

The intention was presumably to provide the tourists with some practice between Tests and when, as expected, they won the toss, they chose to bat. Until lunch, however, Leicestershire’s bowlers were uncooperative enough to make a game of it, reducing them, at one point, to 64-5. There had been a September dew in the early morning, and, perhaps, Klein and Chappell were a little sharper than they had been expecting : Klein often surprises batsmen who haven’t faced him before ; Zak was bowling at a little below full pace and, perhaps as a result, was more economical than usual (his first nine overs cost only eighteen runs).

Brathwaite and Hope (K.) were trapped lbw by Klein and Chappell, by balls that swung and dipped in respectively, for single-figure scores ; neither Chase nor Blackwood reached double figures either. I was intrigued by the prospect of seeing Hope (S.) bat, given the records he had set at Headingley, but statistics mean nothing when you play down the wrong line, as he did to a delivery from Richard Jones, edging the ball on to his stumps having made a 28 that had hinted at better things. It was two players who had not made much impression at Headingley, Kieran Powell and the wicket-keeper Dowrich, who returned the game to its expected course, with an initially circumspect sixth wicket partnership of 127.

The exception to that circumspection was provided by a single stroke from Powell which impressed itself on the mind like a clap of thunder on a cloudless day, but might well have impressed itself for different reasons. Zak Chappell had been afflicted by one of his usual trials, a slight tickle down the legside that just evaded the leaping ‘keeper and crashed into the sightscreen. His next delivery, predictably, was a textbook bouncer, which Powell chose not to evade, but hooked off the tip of his nose. The ball travelled horizontally at almost precisely 90 degrees to the wicket, at a tall man’s head height, over a boundary which was as short as I have seen at Grace Road, and had rebounded off the Meet with alarming force before anyone in the vicinity had moved a muscle. It must have passed over the heads of those sitting on the benches in front of the Meet, but if someone, as is usually the case, had been making their way to the ice-cream parlour, lavatories or bar, and the ball had hit them on the head, it might easily have killed them. Fortunately, one of the few things at Grace Road which is more robust than it used to be is the glass in the Meet’s windows (once notoriously frangible, and prone to producing showers of broken glass).

Talking of sore heads, the club, perhaps suspecting that the West Indies would not provide enough of an attraction in themselves, had chosen to combine the match with a real ale festival. I am not sure of the precise distinction between craft beer and real ale, except that the former is fashionable and comes in bottles, whereas the latter is less fashionable and comes on draught. Craft beer is, reputedly, drunk by hipsters with sculpted beards, and real ale is, supposedly, drunk by old hippies with untamed beards (as the names of some of the ales, among them “Tangerine Dream” and “Purple Haze” would suggest). The ale-fanciers made up slightly more of a fair-sized crowd the West Indies supporters, many of whom I recognised from the visit of their women’s team in July. 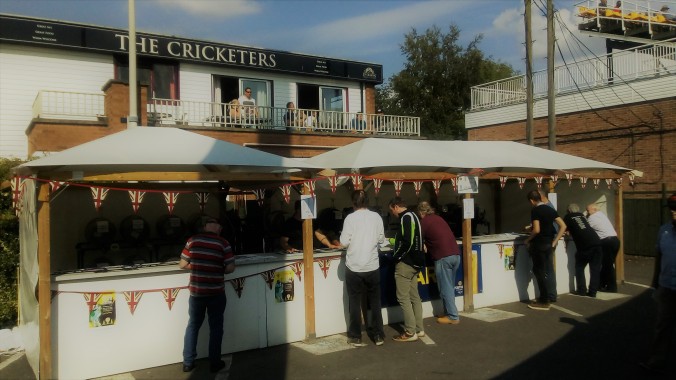 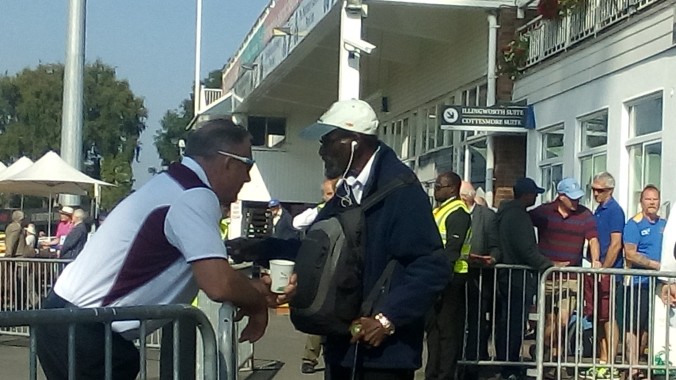 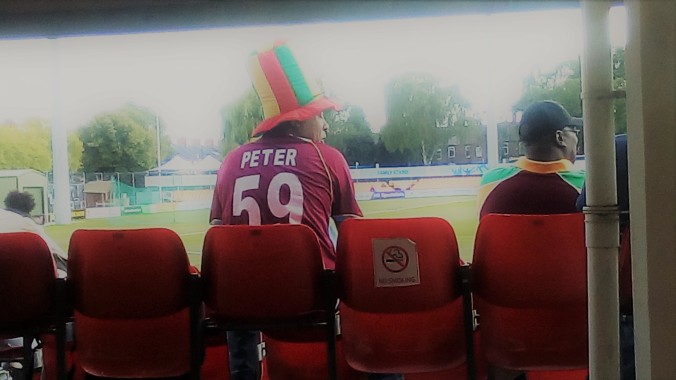 Powell’s thunderbolt aside, the afternoon was balmy, and meandered on its way in relaxed fashion, until, as tea approached, West Indies stood on 161-7. With only the tail to come, the crowd could have anticipated seeing the Windies bowl before the close of play, but that would be to forget the unusual playing conditions. One or two hardened topers (and I am not speaking from personal experience here, you understand) might have felt that they had been overdoing the “Spin Me Round” (one of Roxy Music’s more underrated tracks) as a number nine, with the frankly improbable name of Shimron Odilon Hetmyer, raised the ghost of old-tyme calypso cricket with a gaily-struck unbeaten 128, featuring 17 fours and 5 sixes (mostly hit too high to be a danger to life and limb). This Hetmyer, you see, normally bats at three, and may have glimpsed, and grasped, an opportunity to supplant the faltering Hope (K.), by laying into a tiring attack.

I didn’t bother turning up for the second day. The forecast was dubious, and I suspected that the West Indians would be less keen on bowling practice in chilly conditions. I believe that the match was abandoned because of bad light shortly before lunch (in spite of the floodlights), though I trust that the beer festival was allowed to continue for rather longer.

(Talking of trimmed and unkempt beards, I feel I would be failing in my duty if I did not report on the latest developments with respect to Ned Eckersley’s grooming. For most of the season he has favoured a long, off-centre-parted style, resembling Richard le Gallienne after a couple of months on a tramp steamer, but, for this game, both hair and beard had been severely cropped (perhaps in acknowledgement of the responsibilities of Captaincy).)