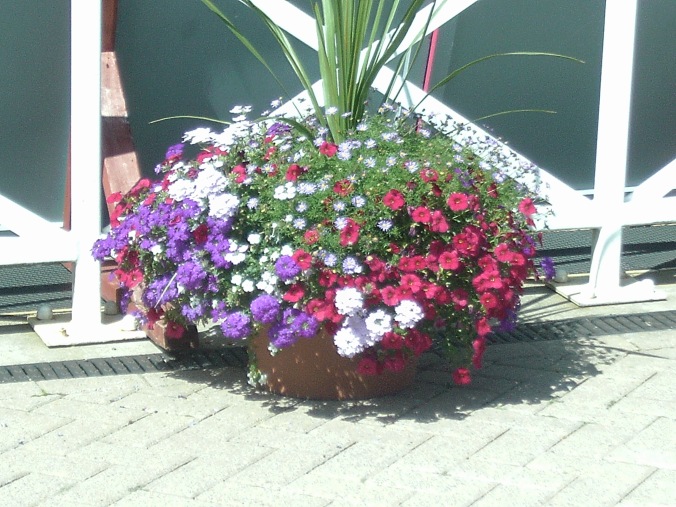 Edgar : “What, in ill thoughts again? Men must endure

Their going hence, even as their coming hither:

Well, this is it (or, perhaps, that was it). This week the sun has (as per Cardus) been “ample”, and the season, like “a rich part of the garden of an English summertime”, has ripened. Readers of Keats will know what comes after ripeness, but, for the moment, ripeness suffices, and if, as Cardus recommends, we close our eyes for a while (preferably without dozing off), we may be seduced into thinking warm days will never cease.

As the season ripens, I have seen some cricketers who are enjoying their “coming hither” (inevitably, Ben Duckett) and a few who don’t know whether they are coming hither or going hence (Leicestershire’s 2nd XI), but, first, one who should, by rights, have “gone hence” some time ago, but seems reluctant to take his cue : Marcus Trescothick, who dominated the second day at Trent Bridge on Monday, as he dominated the match, from the moment he came in to bat at about midday.

Before that we had the tail-end of Nottinghamshire’s innings of 401, chiefly notable for Luke Fletcher’s performance as “nightwatchman” (a role he might suit in Macbeth). The “Bulwell Buffalo” is, as you might expect, quite capable of the village Flintoff style of batting, but his other manner (when he has been promoted up the order) is a self-consciously responsible mix of judicious leaves and delicate nudges. This is hugely entertaining for the crowd, like watching a bear play the harpsichord, but infuriating for the bowlers.

Overton (Craig of that ilk, I think) wasted much time and energy firing in short balls outside off stump, at which Fletcher turned up his nose, like a model waving away a sweet trolley, when a simple Yorker would have sufficed to remove the nuisance. Fletcher eventually returned to the pavilion, to warm applause, with 32 runs to his name. This was not to be the last time he left the field (it was a hot day, and he is a very big man), but the last time he would have done so with much satisfaction.

I cannot pretend to have made a close study of Marcus Trescothick’s batting technique, but, for all that, and for all that I know his nickname derives from his fondness for sausages, a hint of the rustic, of the leaden-footed village banger still attaches to his name, and, though there are other, better reasons, I suspect that has contributed to his continuing popularity with English crowds throughout the land. It does not, though, explain his longevity (he is now in his fortieth year and his twenty-third season).

Wilfred Rhodes is said to have eschewed the cut, on the grounds that “it nivver were a business stroke” : Trescothick now seems to have cut out all off-side strokes, and pared his game down to a minimal three. One is the nudge off his hip, which, with his weight behind it, often goes for four ; anything short he pulls (and these he genuinely bangs) ; to anything else, whether on middle stump or wide to the off, he offers an almost French cricket-style full-faced bat in front of his stumps, before wandering halfway to square leg to attend to some notional divot.

The first time I saw Nottinghamshire this season (on what felt like the coldest day of the year) their pace bowlers were Broad, Bird, Ball and Gurney (they also had Hales and James Taylor in the side). For differing reasons, all of those bar Gurney have gone, and Gurney’s first spell here was wild, dragging stuff : the burden of the bowling, on what was the hottest so far, fell on Brett Hutton, Imran Tahir and the Buffalo himself.

When a player comes in to bat, or a bowler to bowl, the scoreboards at Trent Bridge display huge mugshots of them, and a brief description. Not all of these are flattering (Chris Read’s portrait makes him look like a 19th century Punch cartoon of a Fenian agitator). Most gallingly, Brett Hutton’s describes his bowling as “right medium”, which can only encourage the batsman, and discourage a bowler who, from his body language, aspires to a higher pace.

Poor Fletcher looks, even on the coldest day, like a man bowling to sweat out last night’s ale and though, as always, every ounce of his weight was going into his bowling, he really looked to be suffering in the heat. Frequently, as the weary afternoon wore on, he took refuge in the pavilion, where, one imagines, his trainer threw a bucket of water over him, like a racehorse.

Have-beard-will-travel leggie Imran Tahir has been brought in, one imagines, as a proven wicket-taker, to bolster a depleted attack, in a side who have some reason to fear relegation. Though he earned his corn (taking 7-112), Somerset may have been surprised not to be facing the young spinner, Matthew Carter, who took 7-56 (and 10-195 in the match) against them last year, on what has so far been his only first-class appearance. Carter is just 20, the younger brother of Fletcher’s old partner-in-crime Andrew, and was, I thought, the most promising English spinner I have seen this season when I saw him in a 2nd XI match at Hinckley. Unless he learns to bat, he might be well-advised to put in a transfer request to a less well-funded county.

Unusually, I watched the day out to the end, from in front of the pavilion, waiting, I suppose, for Trescothick to get his hundred, which he did, and then to get out, which he did not (until the next day, when he had made 218). I suppose I was waiting for sentimental reasons, in the original sense of wanting to enjoy the experience of fine feelings, in this case the pathos of seeing the last of a fine career. This may have been the last time I see him make a hundred, it might even be the last he makes, but, though Trescothick is a sensitive man, I doubt he is a sentimental one.  He has proved his ability to evade conventional narratives of decline, and prolong ripeness past the usual time of decay, and I suspect he will continue as long as his strokes continue to do good business.

Nonetheless, as he left the field, as the shadows lengthened, to a standing ovation from the home members, I think I must have had something in my eye … 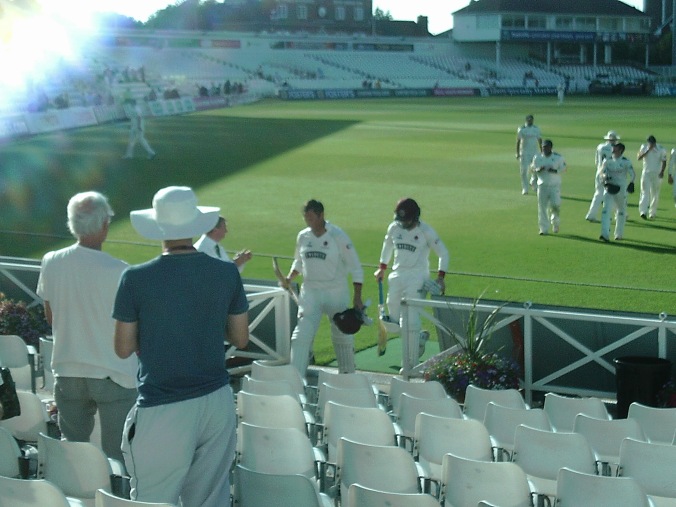 If I did, it would probably have been an ant. One of the subplots of the day was that it was the Day of the Flying Ants in the New Stand : ants in the air, ants in your Playfair, ants in your sandwiches, ants in your hair. This prompted the following overheard conversation, which I offer, for free, to anyone hoping to write a situation comedy in the style of Roy Clarke :

The Ant on the Hat

Elderly Notts supporter 1 : “I saw a programme once, you know, where some professor proved that, if they were ten times the size, ants would take over the world.”

Elderly Notts supporter 2 (thoughtfully) : “You know what you’d want in that situation? An anteater.”

Gloucester : And that’s true too.

Some small gnats, opposite Trent Bridge

5 thoughts on “All is Ripeness : Ripeness is All. Pt. 1. A Hardy Perennial”