Some lines that have often come to mind, as I have looked around at my companions while watching County cricket, are Larkin’s “I know this is paradise / Everyone old has dreamed of all their lives” (from ‘High Windows’).  Not, as for Larkin, unlimited, guilt-free sexual congress (far from it), but the ability, after too many years tethered to a workplace, to watch cricket every Summer’s day for the rest of their lives.

I now find that I have, not unexpectedly, if a little prematurely, attained that paradise, having retired (or, strictly speaking, having been retired, like David Beckham’s football shirt).  Having reached it, though, I am slightly wary that it will turn out to be something of a fool’s paradise.  Part of the attraction of a day at the cricket for me has always been the feeling that I am on holiday, and, recently in particular, that I am on holiday when I ought to be at work, and now, of course, I have no work.

I can assuage this feeling a little by assiduously catching up on the gardening (or, for that matter, by writing this) on the days when I am not at the cricket, and suspect it is probably wise to build up slowly from two or three days a week, but, no doubt, by the end of the season, I shall have attained full badgerhood, and will find myself eagerly scanning the internet for news of one last Notts Academy game at Wellbeck Colliery before the Autumn sets in.

One sign that I haven’t yet fully transitioned is that I’ve passed up the opportunity to watch all but two days of this season’s pre-season friendlies, one at Trent Bridge and one at Edgbaston (the real hardcore will have already put in a solid three weeks cocooned in Gore-Tex and fleece by the time the County Championship begins next week).

Trent Bridge is a venue that I have often visited and have often written about in glowing terms.  Of all the Test-hosting grounds I’ve visited it best pulls off the difficult trick of being both grand and homely, of combining the traditional and the contemporary and of feeling as well-suited to County cricket as the bigger occasions.  It has about the best place I know to watch cricket on a fine day (the Radcliffe Road stand) and one of the best on a cold one – the interior of the Pavilion, which is cosy without being stuffy and has a sense of history, without allowing that history to become too much of a weight.

(While there, I managed inadvertently to photograph, and later made the acquaintance of, Tony Hutton, a stalwart of the Northern circuit and one of the authors of the excellent blog “Cricket History of Calderdale and Kirklees“, which I would advise you to seek out and follow.  He is not the Rastafarian in the foreground, by the way.)

Edgbaston is as near to my home as Nottingham, but I had never been there before Tuesday, and I’m not sure I’m in any great hurry to go back, unless, perhaps, it was for a Test Match.  Whereas Trent Bridge seems to belong to Nottinghamshire CCC, who allow it to be used for Tests, Edgbaston makes no bones about primarily a Test Match stadium, with the Birmingham Bears a close second and Warwickshire a poor third.

Its architect seems to have been a man with one big idea – that you can never have too much reinforced concrete – and that, if you don’t like naked concrete, you can always paint it bright blue. 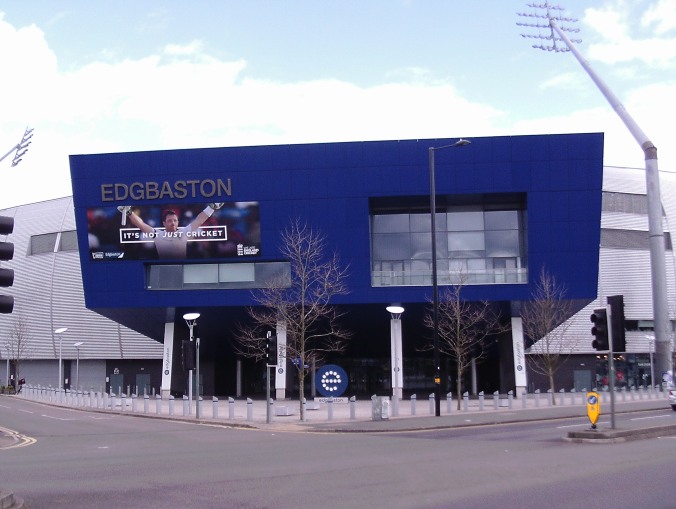 Whereas Trent Bridge has kept its venerable pavilion and built the ground in harmony around it, Edgbaston seems to have erased any trace of its past, except for its “iconic” score box and, perhaps, this bear, clinging for dear life to its ragged staff to avoid getting swept away by the Winds of Change howling around the ground.

They are, I’m told, in the process of developing the ground (presumably to make it even bigger and more packed with reinforced concrete) and, perhaps as a result of this, the concourse around the ground is currently an extraordinary shantytown of tumbledown bars and fast food outlets, weedy waste ground and, in an unusual touch, a small evangelical church around the back of the R.E.S. Wyatt Stand.  In fact, the whole place is such a mixture of brutalism and edgelands that I wouldn’t have been too surprised to have spotted some earnest young man with a beard and tattoos tapping out a Tumblr about it.

But this is, I confess, a superficial impression, formed in unpropitious circumstances.  County cricket supporters are hardy organisms who, like lichen, can thrive in apparently inhospitable terrain and, if I became used to the ground, I’m sure I could, in time, carve out some homely niche for myself there.   In fact, when the sun came out briefly in the late afternoon I could picture the particular concrete terrace I was sitting in as the surrounds of a seaside lido, and the executive boxes as beach huts, the Members picking their way gingerly down to the pitch in their swimming costumes, shoes and towels in hand.  But that would have to be much later in the Summer, when Gore-Tex and fleece are but a distant memory.

As is usually the case in these games, the cricket itself was fairly negligible (their main purpose seems to be to reacclimatise the players to the English weather after their earlier pre-season warm-ups in Barbados or Dubai).  Both Bell and Trott (whom I had been wanting to see) were out before I arrived at Edgbaston, and it is no news that batsmen of the quality of James Taylor (seen here sizing up the opposition),

Sam Hain or even Laurie Evans are not likely to be troubled by the second string attacks of Second Division Counties. The regulations allowed them to retire when they reached around 55 and they all seized the opportunity with some alacrity.  We should all be so lucky, eh readers?

A feature of Trent Bridge is that the doors to the pavilion have small portholes cut into them, to allow the gatemen to see when a player needs to be let back in.  I thought I would try to record the view through one, but all I seem to have photographed is air and light.

How did that Larkin poem end again?

Rather than words comes the thought of high windows:

And beyond it, the deep blue air, that shows

Nothing, and is nowhere, and is endless.