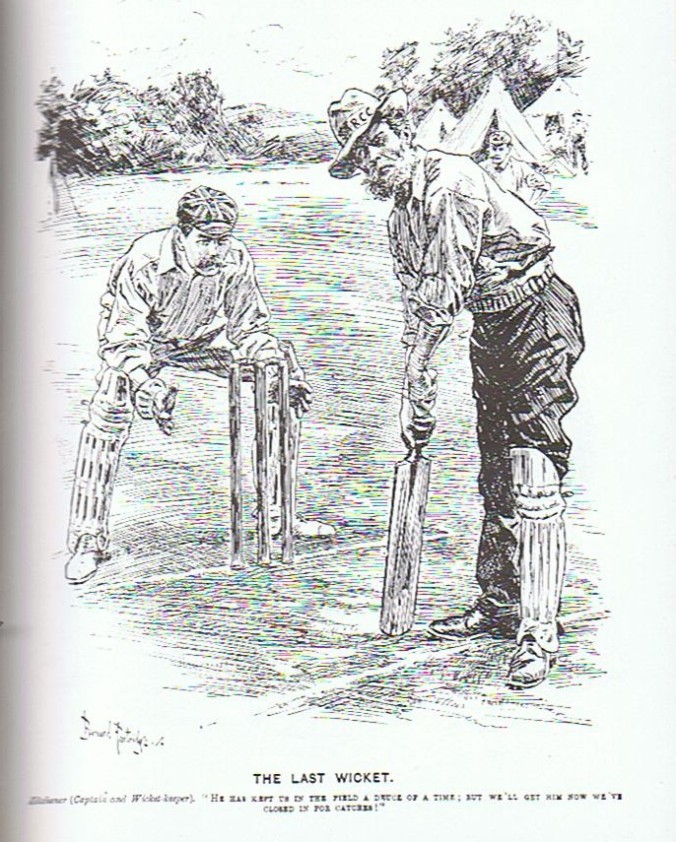 This is the last letter I have from G.E.M. to the boys back home in the Liberal Club, originally published in the ‘Hinckley Times’ of 5th January 1901.  By now a difference of opinion had emerged between the two sides as to whether the war was over.  The British, having defeated the Boers whenever they could catch up with them, captured their capitals at Pretoria and Bloemfontein, as well as Johannesberg, and forced their leaders to flee, thought they had won (G.E.M clearly shared this view).  The Boers, unfortunately, disagreed and declined to surrender.  Though the war was to drag on until May 1902, becoming increasingly dirty in the process, G.E.M. finally returned home in the Summer of 1901.

One slight compensation for being stuck in South Africa, as you will see, was that he did manage to find time for a little cricket while he was there.  As a 6’3″ fast bowler on what was likely to have been a primitive wicket he must have been a testing proposition.

Dear Mr. Taylor – When I wrote last little did I think we should be in this country in December.  We with other Volunteer Companies of the Brigade left our regiments at Lydenburg on October 9th, and marched the 40 miles of mountainous country to Machadadorp in three days with an empty convoy.  When we arrived we were told we were to go straight for England.  We were put on full rations at this place where we had to wait five days for a train.  Whilst at Machadodorp Gen. French’s column passed through and engaged the enemy a few miles away.  We also experienced a severe dust storm.  The dust was so thick that it was as dark as night and the wind was terrific.  After two and a half days in the trucks we arrived at Pretoria, where we were fitted out with clothing etc. and transferred from ragged and unkempt warriors into quite a smart corps.   We had plenty of opportunities of seeing the sights of this much-talked of place, Kruger’s house, museum, prison etc. during the ten days we remained.  With fifteen other companies we were present at the review by Lord Roberts and I can assure you that in the march past we did credit to the county we belonged.  On Sunday, Oct. 28th we were aroused at 11 pm, packed our traps and marched to the station, and took possession of some empty trucks, ready to move at daylight.  We congratulated ourselves we were now well on the way home.  No more short rations, no more trekking, no more outposts.  It seemed like a dream to think we should have every night in bed and be able to sleep with our boots off.  Ugh! it was a dream.  Before 8 am we reached Elandsfontein Station where we disembarked, marched through Germiston and relieved a company of the “Fighting Fifth”.  We started well, going straight on outpost, where we got 24 hours on duty and the same time off.  It would only be for a day or two we thought, but we have had nearly six weeks of it.  The first ten days over 20 men were admitted to hospital, most of them have however returned to duty now and the last week the draft which was sent out to us in May joined us.  We had a rather nasty experience one day.  The lightning struck one of the tents, partially destroying coats etc. hanging round the pole, completely shattering the butts of five rifles into splinters, and injuring several men, two of them still being in hospital.  The occupants of all the tents received a severe shock.  I was on outpost at the time, so escaped.  The place  where we are stationed is in the centre of the Gold Fields, eight miles from Johannesberg, Boxbury, Georgeton, Germiston and Elandsfontein being close to us.  Most of us have been to Johannesberg, where there are some very fine buildings.  In some streets you could see handsome business premises, equal to any in our large towns, and each side would be a small corrugated iron store; it was a practical illustration of “from the sublime to the ridiculous”.  But here is no doubt it is a fine town, much better kept that Pretoria, the late home of the slim Oom Paul.  It is a great disappointment to us being kept here, as we did not for a moment doubt that we should spend Christmas at home; but we cannot all be C.I.V.s , although we have, like them, only done our duty which is what we came for.  I do not doubt they have done good work, they have had a grand opportunity.  One thing, they have introduced a new religion into the Army.  Ask a Tommy how many religions there are in the army: he will reply Church of England, Roman Catholics and C.I.Vs.*  I am afraid Tommy is a little jealous.  We hear some amusing tales about them sometimes.  I am afraid we shall spend our Christmas on the veldt.  The other night our picquet was strengthened as it was expected a few Boers would try to get through.  It turned out a myth, however, and we failed to spot any.  We have a lot of rain and some severe thunderstorms and several times have had to sleep between wet blankets, but that is nothing.  During the days we are off duty we play cricket matches, and have a bit of sport ratting, and generally succeed in getting good bags.  I don’t suppose we shall be home before the end of January.  I am afraid if they keep us much longer we shall begin to think we are such an important company the British Army cannot dispense with our services and we shall grow vain on the strength of it.  If we are still here at Christmas I shall drink the health of “absent friends” in the strongest beverage we get out here – tea.  I hope all are in good health.  (I am glad to say I am), and will have a good old-fashioned Christmas and a Prosperous New Year.  With best wishes

Played at Germiston on Monday, November 20th and resulted in an easy win for the Volunteers.  Leicester, winning the toss elected to bat first, and were not dismissed until they had compiled the respectable score of 124.  Angrave (29), Firr (26), Uncas (16) being the chief contributors.  The cavalry going in were quickly dismissed for 21, Mustin securing six wickets for six runs and Firr** four for twelve runs.

** This Lance Corporal Firr is commemorated on Market Harborough’s  memorial to those who fought in the Boer War. He may have been related to the famous professional huntsman Tom Firr.