A third bulletin from South Africa, where the game of Hunt the Boer continued.

This, incidentally, is a photograph of G.E.M back home in Hinckley with his wife-to-be Rose Peto (back row) and her sisters Gertrude and Nell (all three of whom, like most in the town, were employed in hosiery factories).  He doesn’t look particularly tall in this photograph, as Rose was herself about six feet tall. 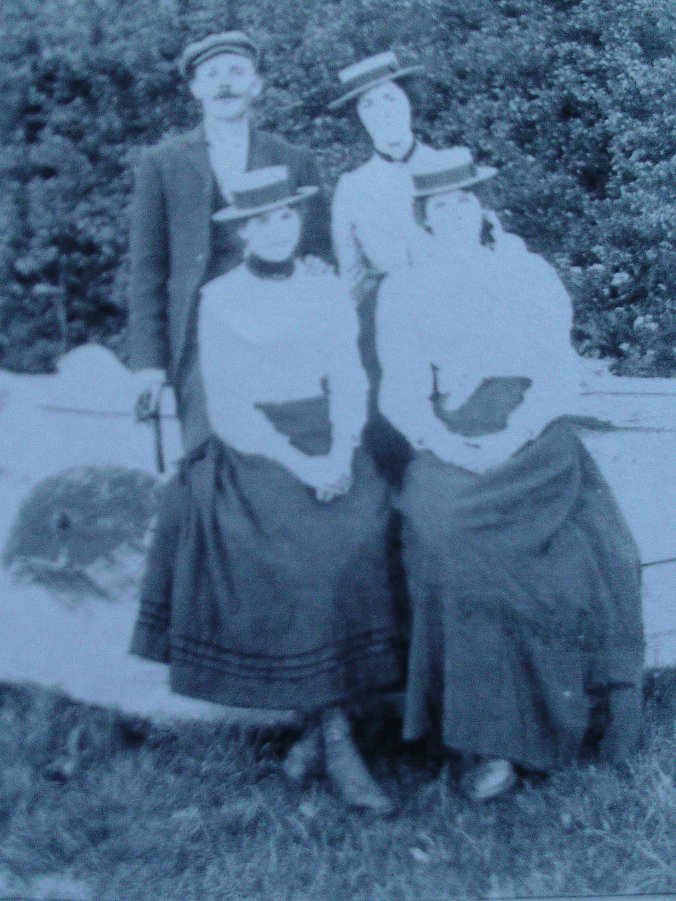 WITH THE “L” COMPANY IN SOUTH AFRICA

HARD UP FOR MATCHES

The following interesting letter, from Corporal G. E. Mustin, has been received at the Hinckley Liberal Club, by Mr. A. Taylor: –

I was very pleased to receive your letter and to hear that all old friends were going on much the usual way.  I can quite understand T.S.A. going into the wholesale rose trade, and no doubt he will be successful if his garden is as large as some of the growers who exhibit.  The parcel of tobacco came to hand a few days after the letter, and I am extremely obliged for the gift … Since writing last we have changed our quarters many times … On May 23rd we left this camp, our tents etc. being sent down country and we prepared for a rough time and we have not been disappointed.  We are now moving every day.  Loading our waggons with greatcoats and blankets we fell in at times as early as 3.30 a.m. and one day we had marched 8 miles before daylight.  On the 29th we had reached the Buffalo River, and after staying one night, we had orders to advance to Stales Drift where a commando of Boers with two guns had taken up a position.  We moved off at daybreak, the Gordons advancing on our right.  Our advance guard got in sight of the enemy but they scooted as fast as their horses could carry them.  Soon after firing was heard and it was supposed  they had come in collision with General Hillyard.  After this we crossed the river and found ourselves in the Transvaal at last.  A few days more marching about and we reached our present bivouac ground, Coetzees Drift, which is situated about 10 miles from Mujaba and about the same distance from Pogwani, where the Boers have large guns in position.  When we arrived a three days armistice was being arranged, and it was generally thought that it would result in a general surrender of all the enemy round about this quarter, as they are practically surrounded.  Wednesday morning, our hopes were doomed to disappointment, as the Boer guns started merrily.  Our artillery soon returned the fire, and we could see the shell bursting close to the Boer guns.  This was getting interesting but not so interesting as the fact that we received bread in place of the usual pound of hard biscuits on that day.  On Thursday the firing was kept up for a time, and on our left an engagement was in progress, General Hillyard forcing Bothas’ Pass.  Desultory firing has been maintained until this morning from Pogwani but, for some reason, all is now quiet.  The position the Boers hold is a very strong one, but as we have the men and the guns, I don’t think they will last long.  The nights are very cold now … Considering we have to sleep in the open with a couple of blankets only as covering, you may think it is not all honey, and you can scarcely wonder at fellows getting tired of such a life.  It is not so bad when in good health, but I am sorry for anyone out here who is not up to the mark, as no comforts are procurable.  I am sorry to say we have nearly thirty men in hospital and down the country … The remainder of us and the reserves from the town are in grand form, the beefy ones improving day by day although losing weight more rapid than you would think possible.  We are not troubled much about our personal belongings, as the whole of my kit beyond that I stand in comprises one shirt, and one pair of socks.  There is a dearth of matches now, and we find our field glasses very useful for lighting our pipes.  When a match is struck there is a general rush with paper etc. to obtain a light, which would amuse those at home who get their matches without trouble.  The other day, the sun not being very strong, we were unable to use our glasses, several of us stood about waiting to spot a light.  A non-com came strolling by charging his pipe and we made safe he would soon produce his matches.  As they are now worth 6d a box we could not ask him for one so we quietly followed him for a few hundred yards, so we quietly followed him a few hundred yards, he then stopped, we gathered expectantly, and we were thunderstruck when he asked if any of us had a light. Yesterday as I sat quietly writing, I was disturbed by the sergeant-major yelling for the battalion to fall in quick.  I felt sure that the Boers were coming at last, but it was a grass fire, which are very prevalent here … I have slept in a tent twice during the time I have been out and always sleep in boots and dressed.  When not too cold, it is not unpleasant to sleep outside, and gives one who is so inclined a splendid chance to study astronomy, not much in my line … I often wonder how it would feel to sleep in a soft bed again, but I doubt if we could sleep any sounder than we do now, even though we have 150 rounds of ammunition for a pillow, and often with our rifles by our side.  Though we have a lot of hardships and discomforts to put up with … we have had things easy compared with our comrades who were in the siege [of Ladysmith].  I should like you to see the company now, ragged and rough no soles on the boots, and bare knees and a display of shirt in the rear of their persons is a common sight, but those who are left are thoroughly fit for anything they may be called upon to do.  With best wishes to all old friends and thanking you for kind wishes.

P.S. The Boers are hard at work sangar building on Pogwani, which accounts for their silence.  Have just heard of a reverse farther north.  I don’t believe it.  G.E.M.

Many ladies and gentlemen have by them old or disused teeth, which might as well be turned into money.  Messrs. R. D. & J. B. Fraser of Princess Street, Ipswich (established since 1833) buy old false teeth.  If you send your teeth to them they will remit to you by return of post the utmost value; or, if preferred, they will make you the best offer, and hold the teeth over for your reply.

[n.b. I can offer no guarantee this offer is still available.]

2 thoughts on “On Tour in South Africa with the Leicestershire Infantry Volunteers : Part Three”